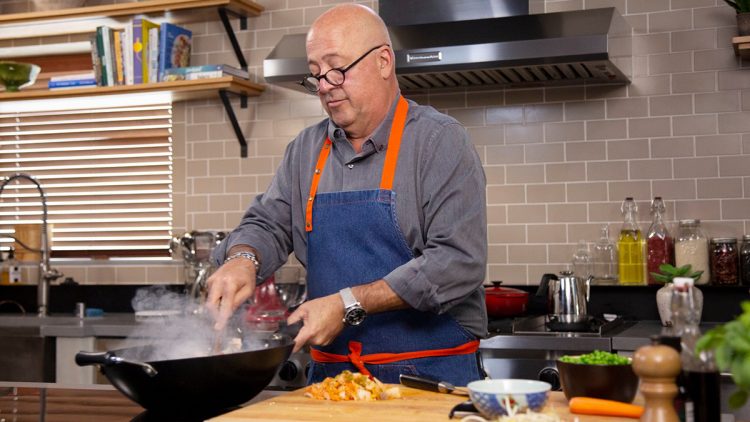 A James Beard award winning television host and one of the most recognized chefs in America, Andrew Zimmern is on a mission to get people to see pressing issues through the lens of food.

In his newest show, “What’s Eating America,” Zimmern tackles some of the provocative political issues impacting Americans today, like immigration, voting rights and healthcare. He does so, however, by using food as a vehicle to tell these stories in a way that reaches people on a familiar level.

The Gourmet Insider not only got to speak to Zimmern about his latest venture, but he also dished on his favorite food ever, the tool he thinks everyone needs to have in their kitchen and his grandmother’s winning recipe.

The Gourmet Insider: Chef, thank you so much for taking the time to speak with us today. Can you tell us a bit about “What’s Eating America” and how food has become a vehicle to get hard messages across?

I feel that stories told through food are a very powerful way to get people to relate to the stories themselves. For example, some people have been burying their heads in the sand about climate change. So, I wanted to take them on to fields, on farms, on the water with fisherman — fourth and fifth generation food suppliers; people who look and sound just like their friends and neighbors — and listen to them say, “No, this is real. This is what is happening. This is what’s changed.” I felt that powerful kind of storytelling was missing.

I also felt that something was missing from the food television world and that is real issues and real topics being discussed. I couldn’t find it anywhere. I felt that for 25 of 30 years of “The Food Network” generation and 50 to 60 years of food television all together, I felt that people were ready for more than just a recipe.

People are already aware that food is civics, food is national security, food is economic development programs. Food is everything in our world today and to tell those stories was very easy to me.

TGI: Times are a bit unsettled right now. Do see anything positive coming out of the continued cooking at home trend?

AZ: Right now, we’re in the middle of a global pandemic. I am happy to see more people cooking at home, I hope that more people will continue to cook at home, spend more time at home and more time having family dinners.

TGI: Speaking of cooking at home, what is your favorite kitchen tool?

AZ: I’m not very big on gadgets at all, but if I had to pick a favorite kitchen tool that I can’t live without, it’s my multi-tiered bamboo steamer. It sits inside a wok or any oversized pan or pot, but I just add more levels. I could cook 30 pounds of asparagus if I wanted to, just by going vertical. It is extemely handy for a lot of different reasons.

TGI: Is there an underrated kitchen tool you wish people would use more?

TGI: What would you tell a novice home cook that may be intimidated to get into the kitchen?

AZ: I actually have the same words of advice for everyone — cook three things a week that you haven’t cooked before. It’s the only way to keep learning. The only way to live life is to become teachable. People need to practice cooking by cooking things that they haven’t made before, trying new techniques. Spend time at a cutting board. Cut carrots and onions every day and, at the end of the week, make soup. Practice and improve your knife skills. I feel like that is your secret to success in the kitchen.

TGI: Is there a cooking trend right now that you feel people have to pay more attention to?

AZ: Sous vide cooking is elegant, it’s fast, it saves money, it is a time-saver, it will slowly cook something safely without flame while you’re going about your business. You can rapidly cool foods when they are in food safe plastic and vacuum-sealed by putting a little ice water in your sink. I can’t think of a more under appreciated cooking technique that could help the average home cook then that one.

AZ: I’m a Jewish kid from New York, I need to say chicken and all its parts. I can do 1,000 things with it. I love it. I’m kind of obsessed with chicken.

TGI: Is there a favorite dish that you like to cook, or that you cook often? Is it a chicken dish?

AZ: The dish that I cook the most is my grandmother’s roast chicken with a variety of root vegetables in the pot and her pan gravy that went with it. I cook that at least once a week. I can’t think of another dish that I make as much as that one. Recipe on my website.