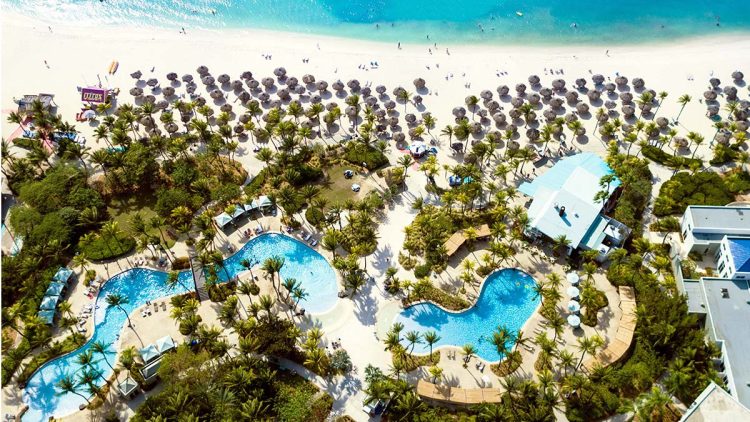 It’s practically required during a vacation in Paradise Island, Eleuthera or Bimini to order a round of Bahamas Mamas. And can you even really say you’ve been to Maui or Oahu without sampling the blue tipple named for the hue of the surrounding Pacific waters? But among cocktails inextricably named for (and linked to) tropical places, there is one that’s probably a bit less familiar: The Aruba Ariba.

Fun to say — and even more fun to down — the Aruba Ariba was created almost 60 years ago during a cocktail competition at the Aruba Caribbean Resort, the island’s first luxury property. Designed by Morris Lapidus, the American architect also behind landmark hotels like the Eden Roc and Fontainebleau in Miami, the property opened in 1959 on 15 lush acres on one of Aruba’s most enviable stretches of beach, alongside the indigenous divi-divi trees whose branches grow sideways in the direction of the Aruba’s strong trade winds.

On July 1, 1963, the hotel invited bartenders to shake up their favorite combination of spirit, liqueur and juice for vacation goers to sip poolside. Twenty-four-year-old Juan “Jocky” Tromp beat out his contemporaries with his irresistible mixture of vodka, white rum, Grand Marnier, crème de banane, house-made fruit punch and coecoei, a local liqueur made with the sap of the local aloe plants. As Tromp recalls, when he presented his creation to the general manager and a food and beverage executive, he raised his glass in a toast of “Ariba Aruba”, and the island’s signature, beloved cocktail was born. (The name was reversed before adding it to the menu, and it became a tradition to serve it as a welcome drink during check-in.)

A few years ago, the iconic property was transformed into the Hilton Aruba Caribbean Resort & Casino and recently underwent a renovation, retaining its original charm and grandeur with modern niceties including an Eforea Spa, watersports and six onsite dining options. July 1 has actually been declared Aruba Ariba day on the island; but don’t worry, the hotel celebrates the Aruba Ariba all 365 days of the year, and you can order it at any of the property’s bars or restaurants.

If you find yourself on this One Happy Island, be sure to indulge in an Aruba Ariba — or five, since no one’s counting and vacation drinks don’t count. Crush a few during happy hour at Castaways after a lazy day spent under one of the many palapas dotting the beach, use one to wash down a lunch of fish tacos at Gilligan’s Seafood Shack, or raise your rocks glass to toast the setting sun during a private romantic dinner for two right on the sand steps from the surf.

The original recipe has evolved over the years to omit the crème de banane. And don’t worry if you forgot to hit up the duty-free shop before your flight out of Oranjestad; you can substitute that aloe liqueur for grenadine.

Directions: Add all ingredients except garnish to a cocktail shaker, add ice and shake until well-chilled. Strain into a rocks glass over fresh ice, and garnish with the orange and cherry.