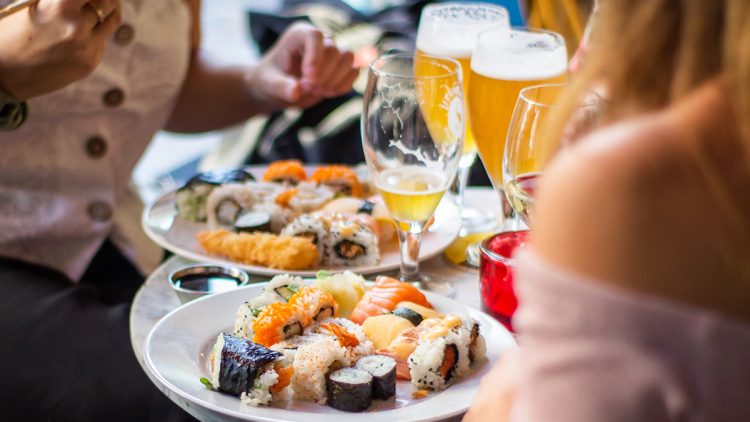 Ever notice that when you go to your favorite sushi bar, ramen shop or Thai restaurant, the brew options are often limited to whatever fill-in-the-blank-brand of light beer that country produces, from Sapporo to Singha?

Quaffable and easy-drinking as these beers may be, they are more designed not to clash with your bento box or spicy red curry rather than actually pair with it. But what if you want to drink something on “Takeout Tuesday” that really elevates what’s in those cardboard cartons?

We asked Greg Engert, the James Beard award-nominated beverage director and partner for Neighborhood Restaurant Group in the Washington, D.C. area, for his thoughts. One of the country’s leading experts on all things barley, malt and hops, Engert oversees the beer programs for the group’s beer-centric concepts including Birch & Barley, ChurchKey, Bluejacket and Rustico. He says that while the possibilities for pairing craft beer with Asian takeout are nearly boundless, he suggests keeping the following strategies in mind:

If there’s heat, steer clear of extremes in flavors or styles.

With spicy dishes, Engert suggests avoiding strong beers, bitter ones like West Coast Pale Ales and IPAs and overly-acidic Sours, all which can exacerbate heat levels.

“For these kinds of dishes I look to beers that show a degree of malt sweetness and effervescence, both of which characteristics tend to quell the spicy notes nicely,” he says. Seek out malty lagers like Helles, Viena/Amber lagers, moderately-strong bocks and fruit-forward ales including German weissbier, Belgian witbier and blonds.

But if a dish is deep-fried, bring on the tartness.

Tempura-battered shrimp and vegetables, pork egg rolls and vegetarian samosas all have one thing in common: They get their enticing crispness from being deep-fried. In the wine world, foods like fried chicken and French fries go perfectly with sparkling wine; the beer world’s answer to bubbly is a sour.

“I love bringing cutting power to fried dishes,” Engert admits. “Whether I am having crab rangoon, spring rolls or General Tso’s, a crisp, effervescent lager or vibrantly tart sour will dig into the richness of the dish and brighten everything up.”

Ordering Indian? Grab some a six-pack of something malty.

The depth of flavor in Indian curries like madras or massaman and the charred character that results when chicken or lamb is prepared in a tandoor work with the caramel, fig, toast, nut, toffee and dark fruit found in malty options, he says. Try amber lagers, doppelbocks, English milds and bitters, Belgian dubbels and Grand Crus.

Nuts, coconut and soy all have an affinity for dark beers…

Engert says roasty dark brews like stouts, porters and black lagers (German schwarzbier and Czech tmavý) are super versatile with Asian cuisine, but their chocolate and coffee character is absolutely perfect when dishes get a sprinkle of nuts in the stir fry or sauce, like with sesame chicken, Kung Pao, pad Thai and satay. Their creaminess also stands up nicely to coconut milk-based Thai recipes like tom kha gai soups and yellow curry.

…but watch out if there is a lot of soy or the dish is rich.

“The peppery, dry and effervescent nature of these brews also works as a tasty counterpoint to soy-based dishes and rich bowls of ramen,” Engert admits. But if the dish is teaming with umami from soy or is a rich fatty preparation like tonkatsu ramen, they can both end up tasting too flabby and heavy.

Southeast Asian cuisine is particularly known for the copious amounts of aromatic produce like basil, mint and cilantro, including Thai larb gai and drunken noodles and Vietnamese Bánh Mì. (What is pho, after all, except an excuse to top a steaming bowl of fragrant broth and noodles with a handful of herbs, sprouts and chili peppers.) Engert loves these offerings with brews that show off their fruitiness and spiciness, especially the lemony brightness of Belgian-style saisons and German ales along with “juicy, hazy IPAs” and — if the food isn’t too spicy — fruitier, creamier, less bitter double IPAs. “The tropical and citrus notes of the hops along with a hint of pine and possibly resin make these ideal for herbal dishes.”

“Quaffable, dry, bubbly and bitter, pilsners provide a brisk balancing counterpoint to salt and umami,” he says. “Digging into the richness of rice and fish and contributing floral, lemony, herbal and spiced hop-driven flavors to the fold.” It’s a winner with anything from hamachi sashimi to sake nigiri to an omakase platter.

Engert’s favorite accompaniment to ramen is a black lager. Crisp, dry and refreshing, yet round with malt-driven notes of dark bread, cola and cocoa, these brews provide a peppery balancing contrast to salt-based shio and soy sauce-based shoyu,” he points out. They have a hint of sweetness on the onset and a toasted bread quality that works for soybean paste-based miso broths and a palate-cleaning effervescence for pork bone broth-based tonkatsu.