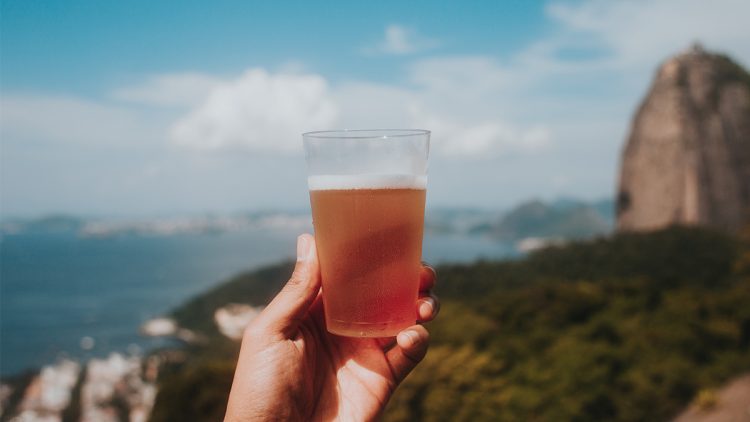 Beers made in the tropics are not necessarily complex, but that’s not the point. Easy-drinking island brews are meant to be refreshing and thirst-quenching, with names and labels that are reminiscent of their swoon-worthy settings. That means when you return from your vacation you may find yourself craving a cold bottle or can that will remind you of time spent working on that tan, dancing on the deck during a raucous booze cruise or bellying up to the swim-up bar for guilt-free day drinking.

Here are five beers meant to evoke memories of swaying palm trees, warm breezes and carefree fun, along with where to enjoy one when we can once again travel to their native home and how to virtually do that in the meantime.

You can’t go anywhere on this lush, green island that lends comparisons to the Hawaii island of Kauai without spotting the Pitons, a pair of mountainous volcanic peaks. So it was only natural that the pilsner brewed by the Heineken-owned Windward & Leeward Brewing Limited was named for them.

“Piton Beer is the refreshing mountain brew that shares with you life’s most rewarding experiences; for tourists it could be a boat tour to the bottom of the Pitons, climbing one of them or even just the trip to St. Lucia to enjoy this cold brew on the beautiful sandy beaches,” says Sylvester Henry, senior category manager. “Piton Beer represents good times and is best enjoyed in a fun-filled atmosphere where people get acquainted and friends are made.”

Fruity with a slight bitterness and yeasty note, the beer is also a major source of pride among locals.

Where to drink it during a Saint Lucia vacay: The Celestial Terrace at Jade Mountain Resort, the breathtaking bar above the resort’s Jade Mountain Club that offers sweeping panoramas, incomparable sunsets and stargazing.

How to enjoy it in the meantime: Plan a future sojourn on this striking Caribbean island while sipping a Piton and watching the webcam at Rodney Bay Marina.

From the home of Rhianna comes this pilsner-style lager made with proprietary yeast, barley and Galena and Styrian Goldings hops, the latter lending aromatics and an earthy, resinous flavor to the beer. But what’s coolest about it is that it’s brewed using Barbadian water that’s filtered through coral stone and limestone rock, which adds to its clean taste and crisp finish. The brand was launched in 1961 by Guyanese entrepreneur Peter D’Aguiar, who first released the signature suds before adding two other expressions: Milk Stout and Tiger brand Malt.

Where to drink it during a Barbados vacay: The Flying Fish, the beach- and pool-side casual all-day restaurant at Sea Breeze Beach House, an all-inclusive luxury resort set on two-and-a-half acres of lush gardens along the Caribbean shoreline.

How to enjoy it in the meantime: Cue up “Diamonds” on Spotify, pop open a cold Banks, put your feet up and watch one of these live Barbadian webcams. “Find light in the beautiful sea, I choose to be happy.”

While you might be tempted to grab an Amstel Bright when on the Dutch island (and we wouldn’t fault you for that), be sure to also sample one or all of the four expressions made by Brouwerij Nacional Balashi. The all-malt pilsner is the flagship product, Chill is a gluten-free pale lager, HopiBon is a premium lager made only with premium German hops and HopiStout is a Caribbean style stout that touts the highest ABV at 7.4% (the other three are brewed to a more modest 5% ABV.)

The beers made on this “One Happy Island” famous for its warm sunshine, blue waters and friendly locals are made using desalinated ocean water, making it a sustainable bottle you can feel good about drinking. Though one could argue if you find yourself on Aruba, you’ll feel good no matter what you are drinking. As for the name, it’s derived from Bala Bala and Balana, words used by the indigenous Aruac Indians meaning “near the sea” and selected after the brewery had a contest among the locals to select a name for the operation.

Where to drink it during an Aruba vacay: While taking in the island air, water views and chilled lobster roll at Palms Beach Bar at the Hyatt Regency Aruba Resort Spa and Casino, a property that just underwent a multimillion-dollar renovation that added an adults-only pool and private cabanas, transformed Spa and more.

How to enjoy it in the meantime: Make a batch of keshi yena (baked cheese balls stuffed with spiced chicken), and nibble on them while checking out the webcam of Eagle Beach from Bucuti & Tara, an intimate, romantic adults-only boutique beachfront resort

On this French island located near Guadeloupe, the golden lager produced by Kubuli is the unofficial national beer. The moniker stems from “Wai’tu kubuli,” the name given to the island by the indigenous Island Caribs, meaning “tall is her body.” (The highest point on Dominica is Morne Diablotins, which is 4,747 feet in elevation.) The beer is brewed by Dominica Brewery Limited using water from Loubière Springs, one of Dominica’s many springs, and is actually exported across the Caribbean, meaning that if you doing an island jaunt and fall in love with it, you’ll be able to find it around Martinique, Antigua, Barbuda and even the U.S. Virgin Islands.

Where to drink it during a Dominica vacay: Alongside some organic local cuisine at Jungle Bay, an adventure and wellness resort spa treatments, yoga and the chance to partake in ecotourism like hot springs, waterfalls, hikes, snorkeling and diving.

How to enjoy it in the meantime: Get inspired by Liz and Daria, who host guests at their home on the island for an amazing cooking class with dishes including creole fish and rice and peas in coconut milk, then tuck into lunch and a cold one with this video postcard in the background from Secret Bay Resort.

Named for the stripes on the local policemen’s uniforms, this Jamaican brand may be the island brew most familiar to travelers. Its heritage is a bit of a surprise as it was first produced in Illinois in the 1930s. When the company fell into financial hardship, they sold the recipe and brand to British investors who moved the operation to Jamaica. Though sales in the U.S. got off to a rocky start when Red Stripe was first imported here in the mid 1980s, it quickly became a beloved option among those who had vacationed in Negril, Montego Bay and other resort areas. The company is also a well-known sponsor of reggae and ska festivals and concerts. If you’ve ever wondered what that oft-used Jamaican expression “irie” really means, it’s buying a plate of jerk chicken from a beachfront shack and taming the spiciness with a distinctly-labeled bottle of Red Stripe.

Where to drink it during a Jamaican vacay: The swim-up Bamboo Bar at Sunset at the Palms, an adults-only all-inclusive boutique resort in Negril whose villas are located in a garden setting just steps from the area’s most blissful beach.

How to enjoy it in the meantime: Vicariously (and safely) watching the cliff divers at Rick’s Cafe, which draws in locals and visitors every day as it’s the best place to toast the sunset.