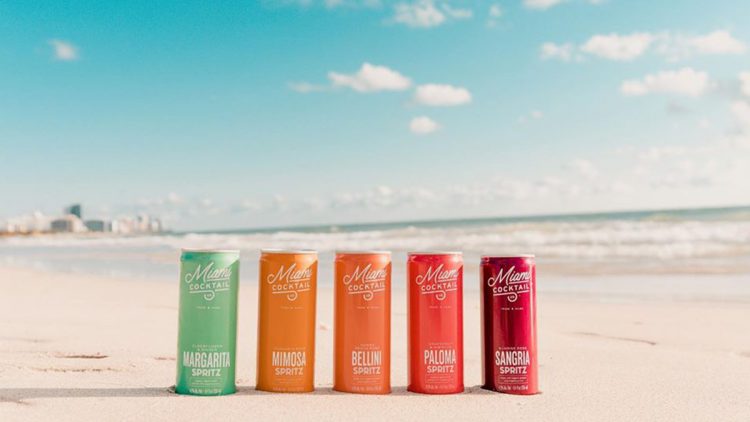 This is the third of a four-part series. Check out new brews here and click here for all the latest hard seltzer offerings. Next week, keep your eyes peeled for canned wine offerings.

However, spirits makers have resolved to not let their adoring fans (aka you) down, canning some of their best concoctions for on-the-go cocktailing. Here are a few of the latest ready-to-drink (RTD) libations you should add to your summer sipping list.

Cutwater’s impressive array of canned cocktails, including Mai Tai and Long Island Iced Tea, is adding a canned mango margarita. A tropical twist on Cutwater Spirits’ classic best-selling Margarita, the brand-new mango margarita is made with real tequila and natural flavors that deliver a juicy burst of mango.

Dogfish Head may be known for its brews, but it is now rolling out three ready-to-drink canned cocktails. Newly launched and available in a 4 pack of slim cans, flavors include Blueberry Shrub Vodka Soda, Strawberry & Honeyberry Vodka Lemonade and Cherry Bergamot Whiskey Sour. Each has a 7% ABV.

Elenita has expanded its canned sparkling mezcal offerings with two new distinct flavors: Passionfruit Paloma and Strawberry Mule. Made from 100% Agave Espadín — a handcrafted mezcal distilled in Oaxaca — it is then mixed with natural juices and sparkling water for an effervescent sip that is perfect for the beach or the pool.

New to this brand’s lineup is a tequila and soda offering. This canned cocktail is made with blanco tequila, real soda, & natural flavors from fruits with no sugar added. Each comes in at 65 calories and has less than 2 carbs per serving. They are available in three flavors, including lime, pineapple and grapefruit.

If you haven’t gotten a sip of Fishers Island Lemonade (FIL), what are you waiting for? The ready-to-drink cocktail is made from dual-spirits base, combining premium vodka, barrel-aged bourbon, honey and lemon in the base recipe and clocks in at 9% ABV. Gluten-removed, FIL is a natural choice for your summer beach days.

A kombucha brewed with Champagne yeast and aged in Chardonnay wine barrels, Kombucha Bubbly is fermented with real botanicals. This combination results in a silky, sophisticated and beautifully balanced libation. Each can has no sugar or carbs and clocks in at 6.9% ABV.

Hornitos Tequila is launching a new hard tequila seltzer, a hybrid seltzer/ready-to-drink cocktail we can get behind. The sipper comes in two natural flavors – Lime and Mango – and crafted without any artificial sweeteners. The ready-to-drink, tequila seltzers are available in 12 oz cans, contain 5% ABV and have a suggested retail price of $11.99 per four pack.

New from ‘Merican Mule is Fire Mule. This sipper made with Bourbon whiskey, proprietary ginger beer and all-natural cinnamon. Smooth and bold, with notes of sweet cinnamon and a hint of spicy heat, ‘Merican Mule’s newest Fire Mule canned cocktail is well-balanced with a kick. Best enjoyed cold and straight from the copper can or a copper mug for the full mule experience.

Not resting on its laurels, Miami Cocktail Company has six easy drinking canned cocktails that work from morning to night. Selections include a Mango & Peach Rosé Bellini Spritz; Sunrise Rosé Sangria Spritz; Mandarin Rosé Mimosa Spritz; Grapefruit & Hibiscus Paloma Spritz; and Elderflower & Ginger Margarita Spritz. And, that’s not all. These beverages are also vegan, gluten-free, non GMO and only 110 calories so drink up.

Novo Fogo is adding passion fruit-lime and mango-lime to its line of sparkling Caipirinhas. These cocktails feature less sugar, fewer calories and carbohydrates, and lower alcohol by volume. They also contain 100% natural ingredients that harmonize as balanced, carbonated drinks.

Not new, but new to the U.S. market, Nude Beverages is bringing its hard iced tea to the market. Nude’s Hard Iced Tea is a true American-style iced tea with zero carbonation, zero caffeine, and brewed with black tea. There are three flavors available — lemon, peach and raspberry.

Five Wives Vodka Soda is made from a simple yet balanced blend of Ogden’s Own Five Wives Vodka and a delicate hint of fresh-squeezed lime citrus — not tart, but just faint enough to add a layer of flavor depth and balance to the flavor of the vodka.

Both varietals are also completely gluten-free, as Five Wives Vodka is distilled with 100% corn spirit.

The brand that brought you flavors like Pineapple & Chamomile and White Tea, Raspberry & Watermelon is rolling out a new flavor this spring — Jasmine, Blueberry & Lemon. This hard tea seltzer was founded by friends and tea enthusiasts Jennie Ripps and Maria Littlefield and is the result of a lifelong passion and respect for ingredients that come from the Earth.

Beloved Long Island Brewery, who recently debuted a hard seltzer line, is now dabbling in the ready-to-drink cocktail game. Southside is a mojito-like lemon-lime cocktail garnished with mint with a hard seltzer base. Gluten-free and a 6.5% ABV makes this a great choice for day drinking.

Your beloved PBR is dabbling in the ready-to-drink cocktail game with the debut of three bold new flavors of the brand’s effervescent hard tea. Flavors include pineapple-passionfruit, lemon, raspberry, and peach. With 4% ABV, the brand has 100 calories and less than 4g of sugar in each can. Drink up.

Atlanta’s first canned cocktail company is coming at you with a bang this season. Their five authentic, ready-to-pour cocktails are made from bartender-quality ingredients like barrel-aged whiskey, tequila imported from Mexico, multiple rums, carefully matched bitters, maraschino liqueur imported from Italy and 100% real lime juice. Catch the new margarita, double old fashioned, lemongrass vodka gimlet, Mai Tai and No. 4 daiquiri in 33 states, plus Washington D.C. this summer. Or, purchase from the company directly. Will pay shipping fees for booze!

The West Coast Mule from R6 Distillery is made with vodka with ginger, lime, and fizz. With a 10.1% ABV in one can, it’s the equivalent of having two cocktails for the price of one. All R6 cans are recyclable to help minimize the company’s environmental footprint.

Volley is a new tequila-based seltzer made with just three ingredients — 100% blue agave tequila, sparkling water and organic juice. Available in four flavors: Zesty lime, spicy ginger, sharp grapefruit and tropical mango, Volley’s gluten-free seltzers can be enjoyed chilled and from the can or mixed into tequila cocktails.

We mean, who can top one of the ones at the top? While Claw is taking themselves to another level with the introduction of its new White Claw Hard Seltzer Iced Tea — a hard seltzer iced tea made with sustainably sourced brewed tea. These sippers are gluten-free, 100 calories and 5% ABV. Flavors include mango, lemon, peach and raspberry.