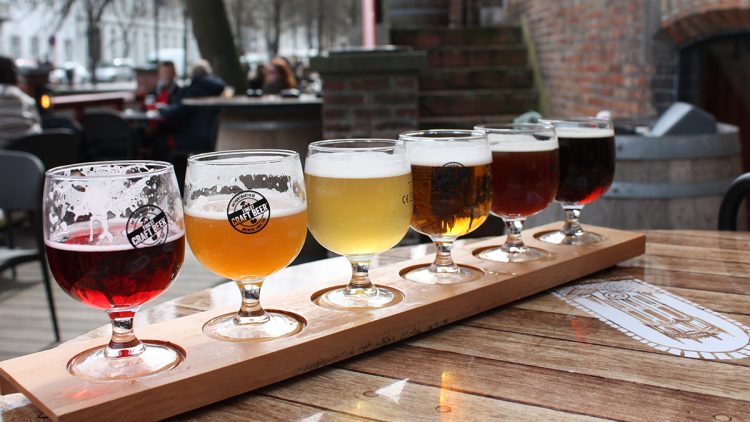 The leaves are turning brown — and so are the brews in our pint glasses. But don’t let your eyes deceive you: All dark beers are not created equally. While you might think that the porters, stouts and brown ales so ubiquitous right now on brewery taps, restaurant menus and store shelves are interchangeable, each actually has its own thing going.

“Brown ales, porter and stouts are always a favorite when the weather starts to get chilly,” says Erin Wallace, owner of Devil’s Den, a New American gastropub in Philadelphia, PA. She goes on to explain that while all beers are made with water, hops, yeast and malt, darker expressions use caramel, chocolate and roasted malts, which lend them their color.

And these malts do more than make seasonal suds match our earth-toned suede boots and fuzzy sweaters; they provide richer mouth feel and flavor, according to Andrew Felty, vice president of Yee-Haw Brewing in Johnson City, TN.

“Browns, porters, and stouts are malt forward beers, [meaning] that the grains they are brewed with are what primarily creates their flavor profile. “Brown ales look just like the name, stouts appear black and inky [and] porters tend to sit right in the middle.”

Nonetheless, things have gotten a bit, um, murky over the years as producers play around with different brewing techniques, Wallace admits. “The lines that distinguish between different styles of beers have been blurred over the years, especially with the additions of untraditional ingredients and the experimenting that brewers have been doing to stand out.”

Here is a primer to help you make sense of things, comparing and contrasting the three categories and giving you some liquid inspiration to add to your fridge this fall:

Of the three beer styles, this is the lightest in both color and flavor, with an amber or tan color and sweet malt flavor with notes of caramel and toffee along with a lower ABV and less hoppy bitterness than a porter, Wallace says.

According to Wallace, a porter has less in common with a brown ale than it does with a stout. “Stouts were originally called ‘stout porter’ which simply means strong porter,” she says. Brown to black in the glass and medium-bodied on the palate, porters have more roasted flavor and a higher abv than brown ales. Muddying things even further, what one brewery calls a porter, another might refer to it as a stout, and in both instances, brewers might add flavorings or ferment or age in different barrels.

Felty also points out that sub-categories exist, including a Baltic Porter, a stronger style fermented as a lager at a cooler temperature rather than as an ale, which is traditionally brewed warmer. Porters go well alongside roasted and smoked foods, barbeques, sausages and gruyère cheese or with desserts with chocolate, nuts and peanut butter, or those with toasted coconut and vanilla ice cream.

Ask most beer drinkers for the brand they most closely associate with this category, and they will probably point to an iconic beer from The Emerald Isle. Guinness Stout, considered a dry or Irish stout, is arguably the most famous expression produced, though people are often surprised to find out that it’s way lighter in abv and body than it’s inky black color would have you believe. Guinness clocks in at just 4.2% ABV, and the alcohol content of other stouts averages from 4-5%.

As with porters, brewers sometimes experiment by letting these brews rest in casks formerly used for spirits like rum or Bourbon, which can boost alcohol, body and taste. An imperial stout is a sub-category dating back to the eighteenth century, which does pack more of a wallop — usually around 9% ABV.