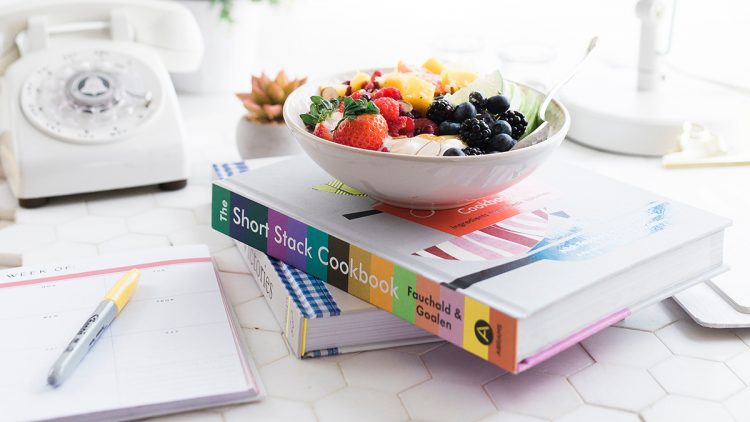 Even in the digital age, cookbooks are a staple in the kitchen. Maybe they house your all-time favorite recipe; were passed down through the family; feature your favorite chef; or just look pretty.

But, finding a place for those cookbooks to live can be difficult. While some may say they belong on a bookshelf somewhere, being able to display cookbooks in the kitchen brings character to the room and also guarantees that recipes are at the ready.

Chrissie Anthony Haim, owner of Chrissie Home & Design in Locust Valley, NY, offered several solutions to ensure cookbook displays are streamlined and eye-catching, instead of the less-than-appealing look many may dread.

While you may have a favorite book or two, Haim explains that finding those with the prettiest bindings will give you a great starting point. From there, she says there are several ways to style them.

“The smaller cabinet above a fridge is often too small for kitchen items, but can be perfect for a row of cookbooks. Remove the door on a cabinet to create ‘open shelving’ for cookbooks, and other decorative items. Or display your books in a cabinet that has a glass front door,” she says.

Haim, though, says that there are other ways to get creative with displaying cookbooks, especially if you have some empty counter space.

Keep your books styled together on a tray or in a basket so it looks tidy, or even mix your cookbooks in with bowls and decor on a shelf,” she says, explaining that adding a bit of whimsy and personality to the kitchen is always a win-win.