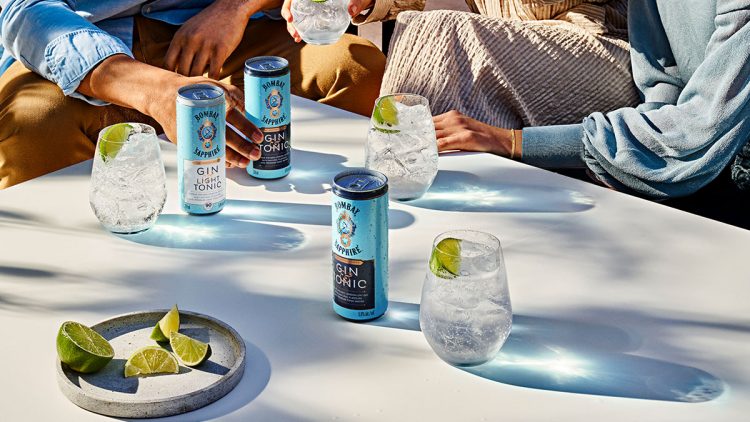 It’s a drink that never really went away. But this summer, the classic G+T is back in a big, big way. And if you can believe it, the latest method of delivery is even easier than mixing two ingredients and squeezing in a lime wedge. Forget hard seltzer: This season’s refreshment is all about botanicals and quinine.

Since a G+T requires so few ingredients, you’ll want to pick high-quality ones, suggests Rico Velasquez, bartender at Jaleo by José Andrés Las Vegas. He prefers a Spanish gin (like Gin Maré), with Fever Tree Mediterranean Tonic and fresh garnishes, whether that’s orange, lemon or lime peels, herbs or a cucumber slice.

“I prefer to use some citrus and an herb like rosemary or thyme, then I throw in some currants or pink peppercorns,” he says. The Spanish way, he notes, is to incorporate a garnish that reflects one or more of the botanicals in the spirit.

In the U.S., the G+T is considered a patio pounder; in Barcelona, however, there is a long-standing tradition of bars serving them with fried foods, Velasquez says. “Spaniards have passed a G+T porrón around the table as a palate cleanser for the oil and saltiness of fried tapas and tapas de frituras,” he says. “The bubbles in the tonic and the herbaceous gin cut the fat and refresh the palate.”

Some of his favorite nibbles with a G+T are patatas bravas (fried potatoes with a spicy tomato sauce), croquetas de pollo (chicken fritters) and dátiles (fried bacon-wrapped dates).

And then there’s the question of glassware. Many of us reach for acrylic tumblers, especially if we will be throwing back a few rounds on the deck or by the pool, but in Spain, G+Ts are served in large bulbous wine glasses which lets the botanicals in the spirit to open up and allows for ample ice. Recently, however, Riedel released a glass specifically designed for the fizzy beverage.

“The glass provides a large bowl in which the aromatics of gin can become more pronounced and concentrated by the tapered rim,” explains Maximilian Riedel, 11th generation CEO and President of Riedel Crystal. “As tonic is added to the cocktail, the bowl’s bulbous center allows for an elevated level of effervescence and ample room for aromatic garnishes.”

He goes on to add that this new glass gives imbibers the base to build their own personalized combination of London Dry or modern gin, gourmet tonic and accoutrements, and predicts it’s a tipple that’s here to stay. “Gin and Tonics will continue to be at the center of beverage world trends as it is a drink that promises freshness and a myriad of flavors.” The glasses are sold in four-packs with a suggested retail price of $49.90.

But if you find yourself in the middle of one of those lazy summer days where you just can’t muster the energy to pull out the jigger or crack some ice, or are completely out of fresh citrus, there are a bevy of new canned options on refrigerated shelves that are refreshing and sport a much lower ABV then their mixed-from-scratch counterparts. As Velesquez predicts, “I know what I’m bringing to the lake this summer.” Here are four totable potables to get your gin on:

The canned cocktail brand teamed up with the winner of the World’s Best Bar for their third collaboration, a co-branded version of the bar’s ever-popular G&T, which has had a place on their permanent menu since 2015. Sold in 4-packs of 200ml cans for $13.99, the cocktail draws on a variety of botanicals and has flavors of lemongrass, grapefruit, green lime and orange blossom. Shop Now.

The gin for this duo of ready-to-drink cocktails is the same one in the iconic blue bottle, with all ten of the botanicals from Javanese cubeb berries to West African grains of paradise. It’s blended with proprietary tonic for a bright and balanced taste and sold in 4-packs of 250ml cans for $12.99.

“The best part about a perfectly made gin and tonic is the refreshing quality it has,” says North American brand ambassador Ryan Wainwright, who believes it’s best enjoyed with bar snacks like charcuterie, cheese, chips, and olives. “The beauty of a Gin & Tonic is it can be as fancy or as easy as you want it to be.” Shop Now.

Made with the brand’s dry, crisp, London Dry gin base, natural flavors and tonic water, this canned quaffer is sold in 4-packs of 12-ounce cans for $14.99. “People think that a Gin & Tonic is one of the most simple cocktails to make, and while it can be, it really depends on the ingredients you have,” says Tanqueray bartender Javier Arroyo. “I think steamed mussels, oysters and prawns are really great pairings, especially if they have a little bit of spiciness to them.” Shop Now.

The flagship London Dry gin from the artisanal British distiller, which touts notes of piney juniper, elderflower and spice, is blended with an house made tonic extract, then sent to a facility that adds carbonated water and cans them. They are sold online and in select cities in 12-packs of 200ml cans for $49.99.

“The Gin+Tonic is already the most popular cocktail around the world…and is easily drunk outdoors,” says director of USA operations Daniel Martinez, who likes to drink it along with smoked salmon or fish and chips. Shop Now.