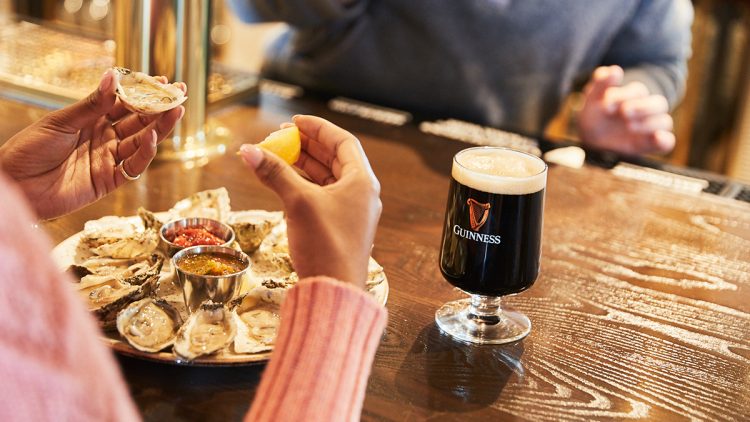 It seems like the only time Irish beer takes a star turn at the table is on St. Patrick’s Day, when a pint glass of stout is served alongside shepherd’s pie, fish and chips or corned beef and cabbage. Ryan Wagner believes we all need to expand our view to the other 364 days of the year.

“The biggest preconceived notion about Irish food and beer is that it has to be simple, there are only one or two beers and one or two dishes that can be a part of the conversation.” That’s a load of blarney.

Wagner serves as national ambassador and certified cicerone at Guinness Open Gate Brewery in Baltimore, MD — the brand’s only brewery in the United States. He’s passionate about spreading the message that Guinness is a global operation that encompasses way more than that legendary nitrogenated pint of stout for which the company is famous. Their beer is produced at around 50 breweries around the world and is served in more than 180 countries, meaning that every day Guinness is enjoyed with street food in Cambodia, chicken yassa in Senegal and mole in Oaxaca. Wagner shared with us his strategies with pairing stout — and so much more — with everything from unassuming pub fare to vibrant global cuisine.

Stout can be a low-abv, food-friendly brew…
The dark brown hue and creaminess of their flagship expression belies the fact that it’s actually quite low in alcohol content — a very moderate 4.2% — and checks in at just 125 calories per pint (16 oz.). Its lighter character and texture mean Guinness Draught Stout can hold its own next to lots of different kinds of cuisine.

“The nitrogen creates a silky-smooth texture that has a big impact on pairings,” Wagner says. “It’s also much lighter in body and more subtle in its flavors and aromas than most people expect, so finding more delicate pairings is key.”

The brininess of full-bodied oysters brings out the beer’s roasted barley character; soft, nutty cheeses like aged brie highlight malty notes and creamy mouthfeel and the easy-drinkability pairs with gamy venison chili while tempering the spice. When it comes to dessert, while people automatically assume that rich chocolate is a no-brainer, Wagner thinks it can actually overwhelm Draught Stout’s light sweetness; he prefers a more subdued sweet ending like vanilla bean panna cotta.

…but there is more than one kind of stout.
Guinness Extra Stout is fully carbonated, with a roastier profile that veers towards dark roast coffee and bittersweet chocolate and a slight higher abv (5.6%). The effervescence is a palate scrubber after rich, mouth coating aged cheddar, those bittersweet chocolate tones work with chocolate-covered almonds, and braised lamb with cherry glaze coaxes out the suds’ light fruit character, which stems from a unique yeast strain used during fermentation.

“And most people may not realize that the process used to roast meat is almost identical to how our barley is roasted in preparation for brewing,” Wagner points out. The technical name for that is the Maillard reaction, the chemical reaction between amino acids and reducing sugars that lends browned food its distinctive flavor; in layman’s terms it means Extra Stout is the ultimate cookout beer for burgers, barbecue chicken and seared steak.

Foreign Extra Stout (FES), the brand’s oldest continuously-brewed beer dating back to 1801, touts a rich, complex profile with flavors of caramel, butterscotch and espresso that can stand up to dynamic food from countries including Haiti, India and Southeast Asia. Try it with super spicy Vindaloo Curry, the combination of sweet and spicy flavors like garlic, soy, sesame, fruits and chili peppers found in Korean BBQ, or Jamaican jerk chicken, with its fragrant baking spices including cinnamon, allspice and clove along with Scotch bonnet peppers. Just remember to save a few sips for a slice of earthy, rich and sweet carrot cake–an unexpected surprise match.

Don’t overlook a staple of Irish beer culture
Red ales (like Smithwick’s Irish Red Ale) lean towards a rounder, malter character rather than coming across bitter and hoppy. They get their namesake color from the use of darker malts, which give them an easy-to-identify caramel-tinged sweetness on the nose and palate. Highlight that maltiness with warm brown bread, honey butter, Manchego cheese, dried fruit, honey-roasted cashews and grilled pork tenderloin slathered with a sweeter rub or sauce.

Cozy up to a blonde with seafood and casual bar food
Wagner says the balance of malt sweetness and hop bitterness in Baltimore Blonde, Guinness’ American Blonde Ale, makes it a highly-functional, malleable workhorse at the table. It’s a match for salty foods like Maryland steamed blue crabs or shrimp coated in Old Bay, French fries and wings. “The only risk is trying to make it stand up to overly big flavors,” he admits. “Sweet items can also be tough as they draw the maltiness of the beer to the forefront, sacrificing balance.”

Embrace the citrus — but steer clear of spice — when cracking open a Guinness IPA.
Many American IPAs — like the one brewed in Baltimore — have citrus flavors that make them ideal for dishes squirted with a wedge of lemon or lime including shrimp tacos, ceviche and grilled fish. But just be forewarned that the compounds found in hops will exacerbate the effect of capsaicin — meaning hot dishes will taste even hotter. Depending on your preference that can be either appealing or off-putting.

When in doubt, remember a few key strategies
Match the intensity of the beer and the food, making sure each is relatively similar in terms of flavor and richness. Also, use one of The Three C’s when settling on an Irish beer and food pairing. The simplest is complimenting, or finding similar flavors, aromas or texture in both; cutting involves using an element of the beer or dish to tone down an aggressive element in the other, be it spice, salt, acidity or sugar; lastly (and trickiest) is contrasting, finding two seemingly dichotomous things that logically shouldn’t work but do, brilliantly. “This takes a bit of imagination, trial and error, and fun,” adds Wagner.

Cook with Irish beer
The most obvious example of cooking with beer is adding a can of stout to beef stew or a splash to chocolate desserts like brownies or trifle. Less expected is adding Extra Stout to Worcestershire sauce and Dijon mustard in a marinade for beef, Baltimore Blonde to the batter for deep-fried fish or chicken or Red Ale to add flavor to slow-cooked pork and sauerkraut. “Just remember to save a bit for your glass,” Wagner advises. “Cooking with beer means having a bit in your hand as you stir the pot or turn the meat!”