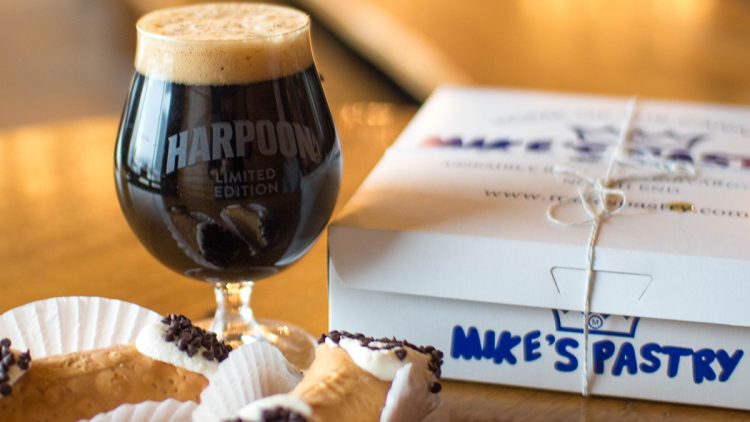 For the second year in a row, Harpoon Brewery and Boston, MA staple Mike’s Pastry have partnered again to brew up their limited release beer — Harpoon Mike’s Pastry Cannoli Stout.

The 7.3% ABV beer is made with Mike’s Pastry’s hand-made cannoli shells, cocoa nibs, lactose and vanilla, recreating the flavor profile of the famed dessert from Hanover Street. The beer is created with cacao nibs and dark roasted malts, which give the sipper pronounced notes of milk chocolate, dark chocolate, and mocha, while the lactose and vanilla give the beer a creamy mouthfeel and ricotta-like sweetness.

And this year, both Harpoon and Mike’s Pastry will be sweetening the pot with extra treats. Harpoon will also be releasing a version of this stout that will be barrel-aged in rye whiskey barrels. It has a 9% ABV and tasting notes of creamy vanilla, cinnamon, caramel, and rye spice.

Mike’s Pastry will be giving cannoli lovers something else to talk about with cannoli kits, which will be available at the brewery. The kits are for $45 and contain a 4-pack of Mike’s Pastry Cannoli Stout, six cannoli shells, filling, and toppings.

The beer hits this market this month and can be found at Harpoon’s Boston and Vermont Beer Halls, retailers across Massachusetts, and in select markets throughout the Northeast.