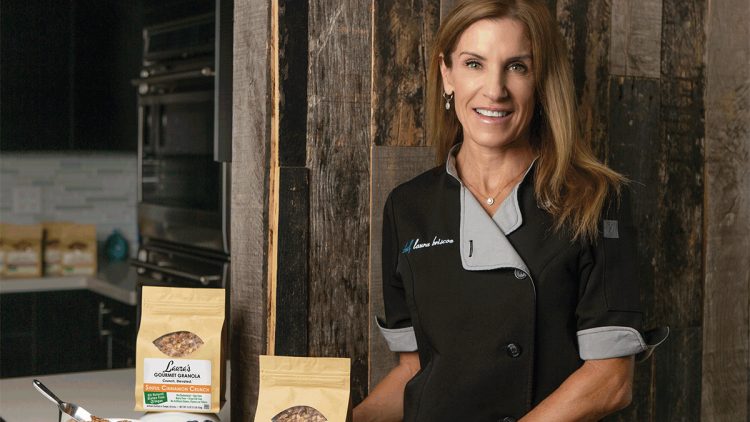 This story has been sponsored by Laura’s Gourmet Granola.

Chef Laura Briscoe, founder of Laura’s Gourmet Granola, was seemingly always testing “better for you” foods. After a career pivot and graduating culinary school in 2002, she became a fine dining chef and started her own company. Armed with her culinary education, she began reverse engineering favorite snacks of her past to be better and healthier. “As a professional chef, you know the recipe outcome is only as good as the ingredients you use,” she says.

Of the many things she created, one of them happened to stick — a recipe for vanilla almond granola that her friends and family began raving about. “I started playing with a recipe of what is now known as Vanilla Almond Crunch for my own enjoyment for several months. Since I was initially creating granola for my own benefit, I chose ingredients that made me feel good about what I was consuming. As a self-professed fitness fanatic, the first rule is what you put in your body should support your health and well-being,” she says.

At the suggestion of a friend, she started looking into how to sell her granola through a retailer and set her sights, as she tells it, on the local specialty purveyor, AJs Fine Foods. “I relentlessly pursued them until they said ‘yes,’” she recalls. Thus, Laura’s Gourmet Granola was born and has grown to include nine flavors, two of which are seasonal.

Nearly 17 years after winning over her first retailer, Chef Laura hasn’t lost touch with what makes her granola special, knowing it is the “batch baked, artisan crafted” method used to ensure its superlative flavor and texture. At the end of the day, Briscoe explains that her passion for the brand is what makes it special. She uses as many “healthier-for-you” ingredients as she can, sourcing many of her ingredients through local suppliers. Preserving the handcrafted, artisan quality is imperative. But it’s the passion, love and care from sourcing to packaging that truly helps create an end-product that is special — especially in the food industry.

Briscoe also shares that a portion of each web sale goes to supporting Alzheimer’s awareness, research and education, in an ode to her father who passed of the disease. If that’s not enough, the company was also awarded a woman-owned business certification in late December from The Women’s Business Enterprise National Council (WBENC). WBENC is the largest certifier of woman-owned businesses in the USA. The certification validates that a business is at least 51 percent owned, controlled, operated and managed by a woman or women.

While some people may think granola is just something to chomp on as a snack, Briscoe explains that the food is actually extremely versatile. From toppings for a salad to a crunchy crust, these delicious bits of goodness have so many uses if you only think a bit outside the box.

“My father suggested enjoying our Honey Roasted Peanut Crunch granola with a beer the first time he tasted it — and he was right,” she says. “I’m always thrilled when I learn of the many creative ways consumers and chefs choose to enjoy our products.”

Other uses, say Briscoe? “Use granola as a crust on fish or other protein. Just crush it slightly and use Laura’s Gourmet Granola instead of breadcrumbs and you have elevated your entrée to a whole new level. Another unexpected favorite is adding our granola to a smoothie or protein shake – it takes the morning beverage up a notch — and don’t even get me started on the baking possibilities.” Her go to favorite? Chef Laura’s Foodie Chopped Salad, the recipe of which can be found on the brand’s website.

“The recipe on our website calls for CherryRific Crunch, but you could use any of our flavors.  This salad is a combination of chopped kale, Napa cabbage, shaved brussels sprouts, roasted sweet potatoes, toasted pepitas, dried cherries and quinoa with a delicious balsamic reduction, all topped with Laura’s Gourmet Granola for a gluten free crunch. I could eat this every single day,” she says.

“I’ve always said, if you love what you’re doing in the kitchen, your culinary result will be delicious. It’s all about what you put into the process; your heart should be the first ingredient. I am convinced that’s why we have such a strong and growing community of Laura’s Gourmet Granola lovers — we love what we do and put our heart into it every single day.”

Laura’s Gourmet Granola can be found nationwide at specialty retail outlets like Whole Foods, Central Market, D&W, and Safeway, in addition to her first retail partner, AJs and online at lauragourmet.com.