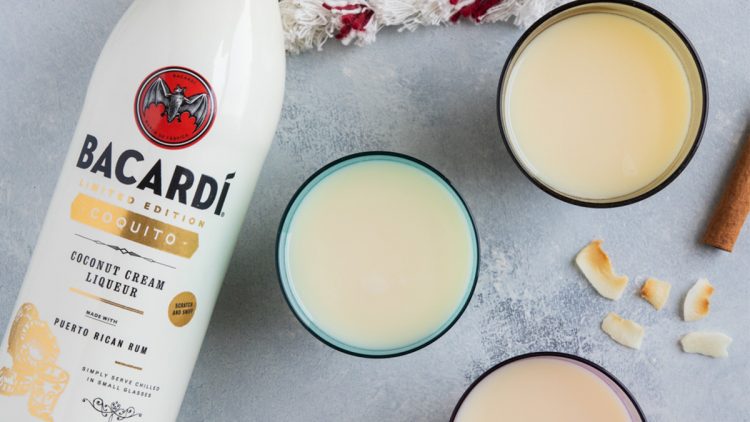 Dreaming of a holiday getaway to the islands? You might not be able to trade your sweaters and fuzzy boots for shorts and flip flops this year. But you can swap out your mug of eggnog for something more tropical that will definitely make it a white Christmas no matter if there is snow on the ground or not: the Coquito.

Attributed to Puerto Rico but now enjoyed all around the Caribbean, the Coquito is essentially a ‘nog hold the egg’, with rum, evaporated milk, condensed milk, coconut cream (and sometimes coconut milk), vanilla and cinnamon, mixed, chilled and ladled out into cups, or shaken and served frothy. The name means “little coconut”, and it’s Puerto Ricans’ drink of choice during the holiday season, which runs from Thanksgiving until the last week of January after the Festivals of Saint Sebastian.

“Its flavor and ingredients definitely speak about the island of Puerto Rico,” says Mario Monte, executive chef of Colada Shop, a chain of concepts in the Washington, D.C. area serving Cuban coffee, pastries and cocktails. “There are all kinds of versions of this holiday drink throughout the Caribbean and Spain, [and] the use of Puerto Rican rum brings a sense of pride to every home that makes it.”

He says everyone on the island has their own recipe, sparking friendly arguments and competition over whose version is the best. “It’s become a shared passion of making this drink at home and sharing it with friends and family.”

The Coquito may have originally been brought over from Spain during Colonial rule, though the tipple’s exact origins are about as cloudy as its milky appearance. David Cid, master of Rums for BACARDI, notes that both rum and coconuts have played a big part in Puerto Rico’s history–just look at the popularity of the Piña Colada.

“With an abundance of coconuts on the island, having a ‘Ron con Coco’ was a common way to refresh after a day of harvesting the cane fields,” he says. “Add milk and sugar, and you can see how we get closer to Coquito today.”

Efrain Riviera, food and beverage manager of Iguanas Cocina Puertorriqueña at the Wyndham Grand Rio Mar Resort, deems the traditional version as the absolute best Christmas drink. “Some people like to use other flavors like Nutella or pistachio, [but] I stick with the classic.” It’s usually batched for large gatherings but can just as easily be made à la minute for one or two servings; either way, he recommends using a higher-proof rum to balance out the richness.

Cid has also seen modern takes that introduce chocolate or add a scoop of orange ice cream or gelato–the grown-up version of the Creamsicle. “Every family has a way to make theirs,” he says. He’s tight-lipped about his brood’s recipe, but hints at how a small amount of freshly-grated nutmeg can subtly elevate the flavor. He also recommends switching out silver rum for an aged expression.

“When I think of BACARDĺ Añejo Cuatro and BACARDĺ Reserva Ocho, I think about the vanilla, nutty, and oaky caramel notes [which] add additional layers of complexity and deliciousness to any Coquito recipe.” If using a heavier rum, Monte likes to split the base between that and silver or light to keep the drink from becoming too heavy.

If you’re too busy decking the halls, trimming the trees and wrapping gifts to mix up a batch of Coquitos, BACARDI reintroduced its ready-to-serve Coquito, first launched last year. It closely follows the traditional recipe, combining the brand’s Superior White Rum with toasted spices, coconut cream, vanilla and cinnamon, but it’s ready right out of the bottle — just chill and serve or pour over ice.

And just in case that combination of milk and coconut cream isn’t luscious and dreamy enough, you can pair Coquitos with oatmeal, chocolate chip or pecan shortbread cookies, Cid says, or integrate the drink into a pastry recipe. BACARDI partnered with the Puerto Rican-owned Brooklyn Cupcake for a cupcake that’s available in the store and online via Goldbelly. The treat injects the Coquito into a coconut cupcake, and slathered on top is the bakery’s signature whipped mascarpone cream cheese frosting — a worthy substitute for the sunscreen we can’t slather on before hitting the beach in San Juan.

Cheers to a sweet season with friends, family and the Coquitos ever-flowing!

Add the first four ingredients to a cocktail shaker, add ice and shake until well-chilled. Either strain over fresh ice in a rocks glass, or strain into a cocktail glass, and garnish with a dash of cinnamon.