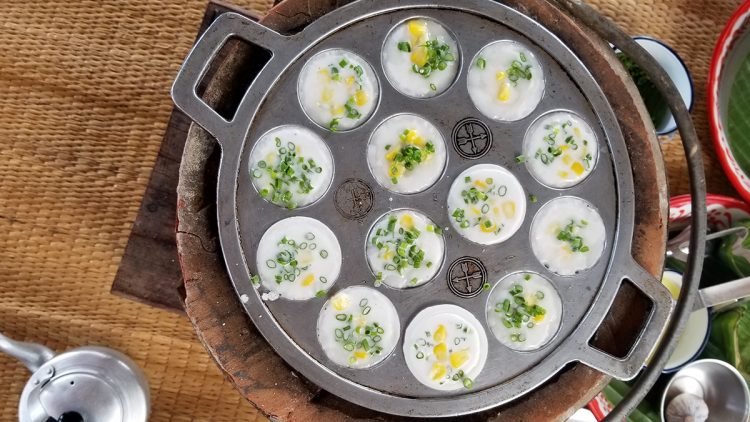 Thailand is famous for its street food at bustling night markets from Old Town Phuket to Chiang Mai, like grilled gai yang skewers and fresh and crunchy som tam; admittedly less familiar are the adorable pancakes called kanom krok. Made with coconut and rice and topped with savory or sweet ingredients, these fragrant, sweet little packages are a surprising little one-bite snack, appetizer or dessert.

Kanom krok date back to the early part of the Ayutthaya period from 1350 to 1767, a kingdom considered to be the precursor to modern Thailand, and they developed in tandem with the cast-iron pan with half-sphere indentations in which they were made. Original recipes were quite simple, with just a rice batter mixed with coconut milk, shredded coconut and water that was cooked and topped with coconut milk and sprinkled with salt; the Royal Thai cuisine version got a bit fancier with the fillings. Other Southeast Asian countries including Myanmar, Laos, Cambodia and Indonesia have similar dishes.

Recreating their diminutive disk-like shape does require a dedicated (but easy to find) pan, but it’s a solid investment as these babycakes will be your unexpected go-to for cocktail parties, picnics and other informal gatherings.

“Nowadays the recipe for kanom krok has become more diverse,” explains Suchanan Aksornnan, who goes by the nickname Chef Bao Bao, owner and chef of Southeast Asian restaurant Baoburg in Brooklyn, New York. “They are made from rice flour filled with custardy sweet and salty coconut cream, on a special Kanom Krok griddle, [with] different sweet or savory fillings or additives such as green onions, corn, taro or pumpkin.”

Chef Bao Bao, who was born in Chiang Rai, Thailand most northernmost province, recalls waking up very early and accompanying her grandma on bicycle to the local market. “She usually bought me a freshly-made kanom krok from the local store–corn and taro fillings are my favorite.”

Today she makes them herself on a cast-iron griddle designed for the dish, which can be purchased online. You can also substitute a pan designed for takoyaki, the ball-shaped Japanese snack made by filling a wheat-flour batter with minced or diced octopus, tempura pieces, pickled ginger and green onion; these pans are widely-sold on online purveyors like Amazon in electric and stove top versions. (A gas flame will better heat the entire bottom surface of the stove top version; if you have an electric stove, especially a flat top, you’ll be better off with the plug-in electric griddle.)

Be sure to brush the pan with oil (preferably coconut) before each batch, and stir the batter each time too as the rice flour easily settles. You can place the batter into the indentations of the pan with a spoon, but a squirt bottle makes things faster and easier especially if you are cooking them for a crowd.

Whether you enjoy kanom krok at the beginning or end of the meal or as a savory-sweet snack, you may wonder what to sip alongside. The coconut flavor pairs well with the coconut and vanilla notes in a moderately-oaked New World Chardonnay, while the bubbles in a moderately dry or demi-sec Champagne or sparkling wine will scrub away their richness while matching the touch of sweetness in the snack.

Whatever you drink alongside, make more than you think you’ll need, because you won’t be able to stop at just one. Or ten.

For the outer shells, separately grind the uncooked white rice and shredded coconut meat in a clean coffee grinder or blender, as finely as possible. Add the rest of the ingredients for the shells, stir and mix until well-blended and smooth, and set aside.

For the coconut cream, spoon the creamiest part from the top of three cans of coconut milk to make one cup, spoon it into a small saucepan and heat just enough to melt and smooth out the lumps. Add the sugar and salt and stir to dissolve. Remove from the heat and let cool before mixing in the rice flour. Stir until smooth and set aside.

Heat a kanom krok griddle or takoyaki pan on the stove on medium-high or over a small round barbecue kettle with medium-hot charcoals; if using an electric pan preheat to 325 degrees. Lightly brush the surface indentations with coconut oil, wait a few seconds, then spoon the rice batter into each indentation, or use a squeeze bottle with a spout, until it’s about three-quarters full. (The batter should sizzle when it hits the hot metal.) Immediately add a dab of the sweet coconut cream mixture over the top to fill, and sprinkle the center of each hotcake with a small amount of a topping (optional). Cover with a round lid and cook for a few minutes or until the hotecakes are firm and crispy brown on the bottom.

Remove gently with a rounded spoon and place on a cooling rack. Regrease the griddle and stir the batter well before making each of the next batches.