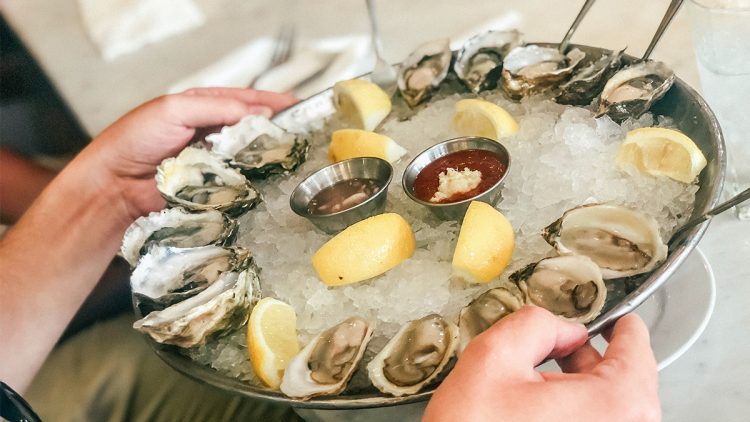 A decadent eating experience, a tray of oysters makes a splash on any table. And, they are especially eye-catching when said tray is finding its way through a restaurant and landing at the table next to you.

But, you don’t need to eat out to partake in this gastronomic delight. We spoke to Ben Conniff, co-founder of Maine-based Luke’s Lobster, for the scoop on all the details you’ll need to make sure oyster eating at home is as enjoyable as it is tasty.

The Gourmet Insider: Let’s start out with the most basic question. How do you know when oysters are prime for eating?

Ben Conniff: It’s generally best to rely on the experts for oyster harvesting and selecting. But, as far as being ready to eat, they are pretty straight forward — if they’re big enough to shuck, they’re ready to eat.

TGI: Is there anything we should know about cleaning or storage that is key to the perfect at-home slurpfest?

BC: Your oyster farmer or purveyor will be sure the oysters are ready for consumption, your job is to store them properly so they are as tasty when you eat them as they are the day they come out of the water.

Generally, the most important thing to remember with oysters is to keep them cold and damp. They have to be refrigerated, and if you have fresh seaweed handy, they can be stored with seaweed on top. If, like most of us, you don’t happen to have access to fresh seaweed, you can store them with a damp towel over them and that will help them stay moist.

The most important thing here is that you want to keep them moist, but not wet. Don’t place them in water, they won’t survive.

BC: Oyster shucking is one of those things that is super intimidating and no amount of explaining can make up for good old-fashioned practice. It’s actually very easy to do once you get the hang of it. The two rules of thumb are don’t get hurt and don’t be afraid.

TGI: Easy for you to say. We will take all the tips for not getting hurt. What do you have for us?

BC: You can wear an oyster shuckers glove, or use a towel, but be sure you’re protecting the hand holding the oyster.

TGI: Got it. Back to shucking. How should we tackle this task?

BC: If you’re a righty, hold the oyster cup side down, ‘flat’ side up in your left hand. Flip it for a lefty. With your dominant hand, take the tip of the oyster knife and work it into the hinge (the very tip where the two shells come together at the point).

You typically are pushing down into the hinge, not straight at it. You have to wriggle it around and be a little forceful, but you’ll feel the blade go in the shell will give way. After that, you’ll want to take the blade and work your way around the shell, separating the top and bottom.

TGI: What if you don’t feel like shucking? Can you still enjoy oysters or should you just be prepared to put the work in?

BC: We love to grill them, which is a great way to eat them if you don’t feel like shucking or if you just want something different. And no two oysters are the same. Wild oysters, for example, have lots of different shapes and are less uniform, so they can be trickier to shuck making grilling a good option for these delicacies.

TGI: Grilled oysters? Talk to us. How does one do this?

BC: Whether you’re grilling farmed or wild oysters, it’s amazingly easy. Just pop them on the grill and when they open up, eat them. It’s just like cooking a steamer or a mussel — once the shell opens, they are cooked. And it just takes a couple of minutes.

As with a raw oyster, you’ll need to detach the mussel. You can serve with lemon, melted butter and hot sauce.