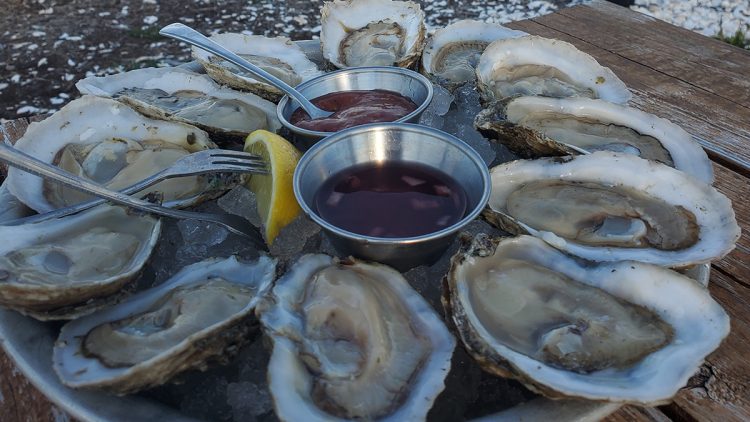 Virginia may be for lovers as the state motto goes, but it’s not only the amorous who will find bliss in the Commonwealth. Oenophiles and seafood fans will find themselves right at home here, especially in the Northern Neck.

It’s in this region, located on the western shore of the Chesapeake Bay, at the confluence of the Rappahannock River to the south and the Potomac River to the north, where Virginia’s wine and oyster trails meet. (“Neck”, in case you’re wondering, is the state’s traditional term for peninsula.)

Look closely enough, and you’ll also be able to find spots to tear into a dozen steamed large Blue Crabs covered with Old Bay or tuck into a duo of lump crab cakes dripping with melted butter. During a getaway to the Northern Neck, here are four can’t-miss spots offering endless bivalves and chilled vino to pair alongside:

It’s not often that you can slurp an icy platter of just-shucked local oysters while sitting right next to the water from which they were harvested. But you can at this casual restaurant located on the Rappahannock River, a waterway that will forever be intrinsically linked to Rappahannock Oyster Company, thanks to cousins Travis and Ryan Croxton, descendents of oyster fishermen themselves.

After a hundred years of overfishing all but decimated the state’s industry by the 1990s, this duo put Virginia’s oysters back on the map with their sustainable aquaculture. Today the hundred or so farmers who work for them harvest a staggering 150,000 oysters per week, now available the world over — including at Merrior, where you can have them prepared several different ways.

What’s surprising to many people is that any native oyster you order from the Chesapeake, or the entire East Coast for that matter, belongs to one species: Crassostrea virginica. Different varieties are so-named based on where they are raised; differences in water conditions including temperature, depth, mineral and algae content and the brackishness of the water allow them to pick up various aromas, flavors and mouth feel. (Merroir is like terroir for the sea — get it?)

The Croxtons raise three different types of oysters, all with their own unique profile. Deep-cupped Rappahannock River oysters tout minerality, subtle brininess and a clean finish. Rochambeaus are farmed from the adjacent York River and are the perfect example of a Chesapeake Bay oyster–sweet and mildly briny with a crisp finish. Olde Salts, which hail from Chincoteague, live up to their name, with an unapologetic savory-saltiness.

If you arrive during a busy time, be prepared to wait for a table at Merroir — snag one outside on the stony patio if you can — as they don’t take reservations. Start with a dozen Olde Salts, served with red wine mignonette and housemade cocktail sauce. (You can buy a bottle to take home, along with their hot sauce or remoulade; or find them at Whole Foods Markets nationwide.) But don’t pass over the succulent, roasted oysters topped with garlic herb smoked butter, or those slathered with housemade chipotle BBQ butter and grilled. Red pepper crab soup gets a splash of sherry and is served in a repurposed crab container garnished with chunks of lump crab.

And the best thing to drink with any of it is a crisp glass of white from Williamsburg Winery, or a cold can of Dogfish Head SeaQuench, a lime-tinged, salty gose from Delaware. Oh, and if you want to make a night of it after all that indulgence, you can rent the adjacent Oyster Bed at Merroir through AirBNB. If you’re lucky enough, you’ll be able to catch a peek at some early-morning harvesting the next day.

If you think fried oysters are one of those dishes impossible to mess up, think again. Cook them too long and the succulent, juicy shellfish becomes tough and chewy, set the oil temperature too low and they come out of the fryer greasy. And if they don’t arrive at the table quickly enough, the breading turns soggy. This unassuming restaurant in Irvington turns them out perfectly; they’ve won countless awards for these babies all over the country — and with good reason.

The concept is owned by Bryan Byrd, a Northern Neck native who spent five years in Key West before returning to launch a food truck then a restaurant. You’ll find hints of Floribbean influence on the menu in dishes like Bahamian conch chowder, fish tacos, mahi mahi sandwiches, Cuban pork and Key lime pie, and the sake-steamed Olde Salt clams and Rappahannock Oyster stew do the shellfish justice.

But you’re more than likely here for those irresistible fried morsels of deliciousness, available by the half-dozen or dozen (and available for $1 each on Thursdays), served with remoulade made with a super secret menu of 13 ingredients. Try them with The Salty Dog, a cocktail with grapefruit vodka, club soda, lime and a salted rim, or a bottle of Petite Verdot from nearby Good Luck Cellars, run by Byrd’s sister.

To really breathe in the salt air of the Northern Neck, book one of the 66 rooms at this luxury waterfront property built on a private peninsula on Carter’s Creek, a waterway that feeds into the Rappahannock River. Even if you aren’t staying there, reserve an outdoor table around sunset at the property’s Chesapeake Restaurant & Terrace, where you’ll find a riff on clams casino made with (what else?) local oysters. Chef Truman Jones tops them with bacon, garlic butter and parmesan cheese, ups the decadence factor by adding some lump crab, and bakes them until bubbly; they pair nicely with a glass of 2017 Michael Shaps Viognier from Charlottesville or Sauvignon Blanc from Williamsburg Winery.

If you are here for lunch, you’ll notice that the bivalves do a quick-change act, arriving at the table baked and topped with Bourbon barbecue butter. And if you have a craving to pick crabs (that’s the term used in these parts for cracking and eating steamed ones, not selecting them), the poolside Fish Hawk Oyster Bar offers a seafood feast after 5pm. Install yourself at one of the newspaper-covered picnic tables, wield a mallet and devour steamed Chesapeake Blue Crabs, Carolina shrimp, Andouille sausage and potatoes served with Old Bay, drawn butter, lemons and cocktail sauce, in-between sips of  refreshing vodka-spiked Lancaster Lemonade.

The Dog and Oyster Vineyard

You can’t miss this winery in Irvington operated by The Hope and Glory Inn — just look for the massive 40-foot tall corkscrew sculpture at the entrance, and seize the opportunity to snap a photo of you next to it for your FB or IG profile. After you grab a table on the welcoming patio, sample their wines by the flight, glass or bottle, made with chardonel, vidal blanc, chambourcin and merlot. On Saturdays and Sundays, chef Stuart Tyson is on hand offering Rappahannock oysters raw, roasted or fried along with soft shell crabs (in season) or crab cakes.