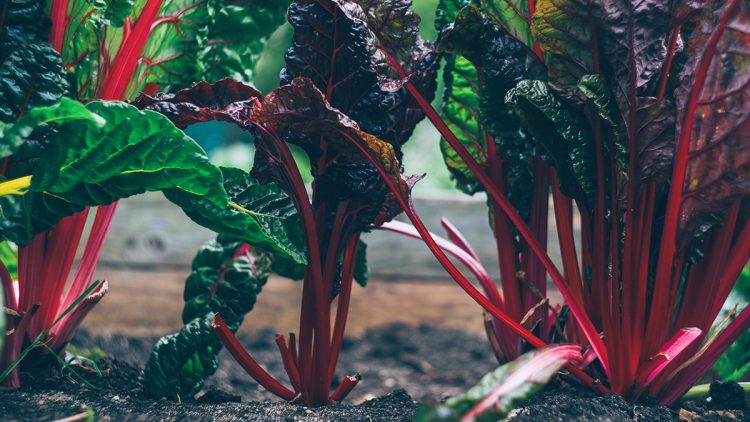 While all vegetables should have a seat at the table, there are only a handful which can touch on all of the tastebuds. Enter rhubarb, the herbaceous perennial that is neither short on flavor or usage.

Chef Mareya Ibrahim, cookbook author of Eat Like You Give A Fork: The Dish On Eating To Thrive, says that rhubarb is enjoying its time in the culinary spotlight, as it can transform from sweet to savory and be used in a variety of ways.

“Rhubarb is a gorgeous red/pink veggie (not a fruit) and a hardy veggie that lasts a while, which makes it really versatile these days when perishability and availability can be big challenges. It goes from sweet to savory easily, and adds a welcome sour flavor and pretty color to savory sauces, chutneys and reductions,” she says.

Rhubarb, explains Ibrahim, is sour and tart on its own, which enables it to act as a flavor complement to many other seasonal ingredients. For example, in the summer, it can gives added depth to sauces for red meats, but then it allows for layers of flavor when mixed with cranberries in the winter. Ibrahim also says that rhubarb is also great to be used with a blank canvas of white meats like turkey, chicken, duck breast or a roasted pork tenderloin to add big flavor.

“Vidalia onion, tomato paste, dijon mustard and rhubarb simmered together make a fantastic barbecue sauce, pan sauce or reduction for roasted meats. With sauces, it adds a beautiful complexity of flavors,” she says.

But, the vegetable is also the perfect addition to sweet dishes, from pies and crumbles to jams, says Ibrahim.

“I love using it in an oatmeal crumb-topped crisp, with rhubarb stewed with star anise and cinnamon stick, strawberries, and a topping of coconut whipped cream. When it’s cooked down, it also adds texture as it is a little ‘jelly’ like, making it a good thickener for jams and fruit preserves,” she says.

Gil Plaster, executive chef, BlueFin North Atlantic Seafood at The Portland Harbor Hotel in Portland, ME, explains that there are some surprising ways that one can use rhubarb to bring more life to a meal.

“Rhubarb is awesome to use in chutneys, glazes, and sweet dishes. It’s usually paired with strawberries. But, you can also use Rhubarb in a salsa to add a bit of tart to more dense fish,” he says.

However, while rhubarb is a vegetable, stewing it can take some of the nutritional value away, since the process means adding sugar to the mix. To make things a bit healthier, Ibrahim offers up several alternatives, from sweeteners to complementary ingredients.

“Because it’s pretty sour, the sharp sweetness of stevia actually works really well with just a pinch of salt to round out the flavors. You can also cut the added sugar by using sweet fruit like strawberries and raspberries, which are low glycemic and won’t spike blood sugar,” she says.

And, when in a pinch, Ibrahim says that working with frozen rhubarb is convenient for when the vegetable isn’t in season, adding dimension to dishes even out of season.

“Using frozen rhubarb is really easy, too, and works well from a texture standpoint in every application because you always have to cook it down,” she says.

But the vegetable isn’t just having a culinary moment, either. Mixologists are using the bright pink ingredient to push the cocktail flavor boundaries, says Marc Daley, beverage director of Lola 42 in Boston, MA.

“Since rhubarb has a subtle tart flavor combined with a lightness, it really lends itself to all spirits. We find it pairs best with darker spirits as it adds another dimension — almost a brightness. It can also play nicely with other fruit flavors, especially sweeter fruits because of its tartness — it creates a very nice balance,” Daley says.

Rhubarb, explains Daley, can also be used to soften a cocktail that is either very fruit forward or on the sweeter side, or it can also round out a heavily spirited cocktail, so that you don’t get hit with all the alcohol up front.