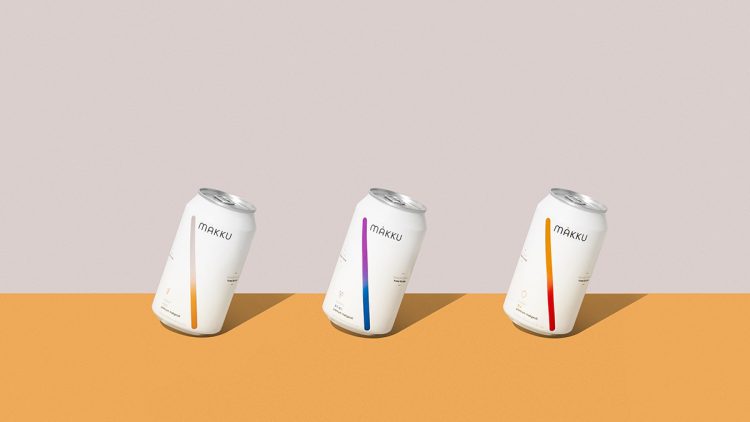 If you consider yourself versed in South Korea’s booze scene because you’ve thrown back a few shots of soju at your local bulgogi barbecue joint, think again. The same country responsible for exporting K-Pop and kimchi to our shores has now inspired a new craft brand of a local potable best described as the love child of sparkling sake and a hazy white ale — and it’s poised to give White Claw a run for its money.

Makku is a hip new brand of makgeolli (pronounced “mahk-OH-lee”), the low ABV, spritzy drink that’s Korea’s oldest form of alcohol. Made with a combination of fermented rice, live cultures and water, it was invented in the tenth century — predating soju by 300 years.

“Much like beer in Europe, makgeolli was a drink for the people, commonly consumed by farmers, tradesmen and the working class after a long day at work,” says Makku founder and CEO, Carol Pak.

Today, the country remains dotted with hundreds of makgeolli breweries and the potable remains a staple among older Koreans — but that’s changing. Thanks to the hard seltzer and kombucha trends, an uptick in crafty artisanal beverages of all kind and sommeliers touting eclectic varietals and emerging wine regions, the canned effervescent quaffer is appealing to a whole new audience of adventurous imbibers.

For the uninitiated, Pak describes makgeolli as a “mochi alcohol with Champagne fizz” or a “fizzy, light, Nigori sake.”

Still it’s quite unique in its own right: Sweet yet tart, bubbly yet soft on the palate (thanks to live active cultures) and creamy yet dairy-free. The secret is in the production method, according to Pak.

While going out to a few makgeolli bars while visiting family in Korea after a work trip to China, Pak, a former employee with ZX Ventures, the global growth and innovation group at Anheuser Busch InBev, noticed that local brands tasted far better than commercial ones she had sampled in the States. That opinion was validated during her second trip when she toured and tasted at various Korean makgeolli breweries. Most of the large ones took time- and money-saving shortcuts, using rice flour or raw rice instead of the traditional steamed rice, sweetening the brew with artificial sugars and augmenting the final product with rice juice or rice flavoring.

Pak figured if she launched her own brand in the U.S. she could have control over thocess, including using a traditional recipe and only all-natural ingredients. The result was Makku, America’s first craft makgeolli, crafted in three flavors: Original, Mango and Blueberry. It’s best enjoyed on its own, well-chilled, either lightly shaken and sipped straight from the chic matte can or poured into a glass, both of which allow the rice sediment to become evenly distributed throughout. But you can also create cocktails with it, using mango in a Bourbon sour and blueberry in a gin fizz. Alongside food, Makku’s creamy mouthfeel and refreshing bubbles temper gochujang-topped bibimbap and spicy seasoned Korean chicken wings.

Above all, makgeolli might just be the palate-piquer we all need right now, a different experience than what you get from your run-of-the-mill, fill-in-the-blank expected canned beverage, Pak believes.

“Honestly, we just ask people to try it, and those who tend to like makgeolli are usually a bit more adventurous anyways.”