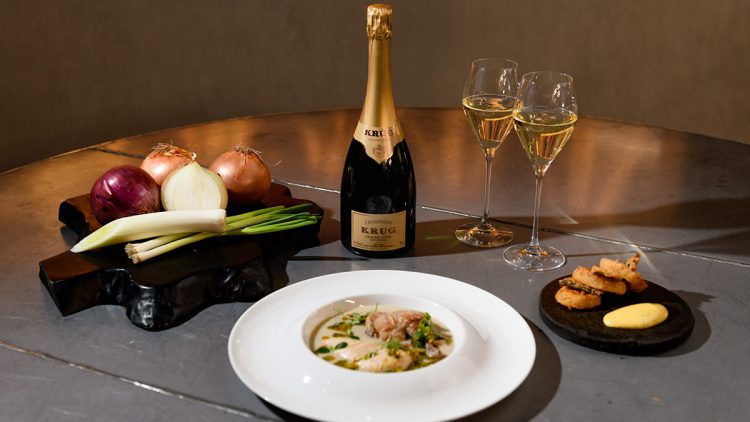 Ah, champagne. The celebratory bubbly pairs well with so many things: Oysters, caviar, French fries. But what happens when you have exhausted the expected? You try the unexpected. Enter, the humble onion.

“It’s an ingredient that can be very versatile, savory, sour, sweet, pickled, can be found in creams, savory ice creams and so on,” says Gabriel Kreuther, chef and owner of his eponymous restaurant, a two-Michelin-star eatery located in the W.R. Grace building across from Bryant Park. He recently teamed up with Krug Champagne to offer Gabriel Kreuther x Krug Single ingredient kit, which combines two ingredients that complement each other, and, according to Kreuther, “require a lot of passion to express their full potential.”

The onion, which is perhaps one of the most basic kitchen ingredients that is part of so many recipes in cooking, is often taken for granted.

“It’s almost part of every savory base at some point in the process of cooking. Stocks, bases, jus; it is part of many garnishes and we even see it being part of drinks and cocktails etc.,” says Kreuther of highlighting the modest ingredient to make it shine with the carefully crafted Champagne.

Chef says that his recipe for Coq au Vin, aptly named “Coq au Champagne,” pairs so well with Krug Grande Cuvée Champagne because of the sauce. This elevated version of the classic dish substitutes champagne for red wine.

“The meat is brined, the legs are marinated in champagne and the sauce is made with celeriac, onions, garlic, champagne, and a Japanese style dashi that brings in an incredible umamito achieve a silky texture,” he says, “The flavors brought in through the celeriac, the mushrooms, and the leek are a perfect link for the complexity and backbone of the champagne.”

Looking for more outrageous pairings that may seem unknown until now?