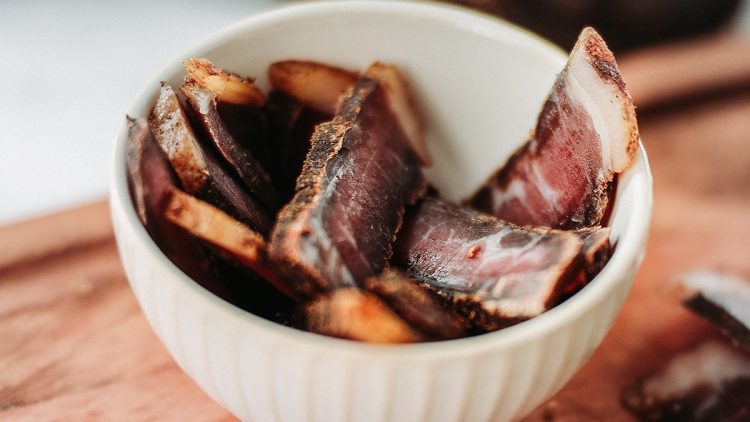 The first time I visited South Africa, I’m pretty sure I ate my body-weight in biltong. I’d heard about the country’s famous cured meats before, but since I’ve never been a great fan of jerky, I was totally unprepared for the life-changing lightning bolt of protein that would strike me the first time I tried it.

Where had biltong been my whole life?

From that moment on, I made it a point to taste as many different kinds as I could, and while I found a particular fondness for kudu biltong — crafted from an animal that is more or less southern Africa’s answer to antelope — I honestly loved them all.

But finding good biltong stateside proved to be a rarer sighting then spotting the elusive leopard on a safari in South Africa. A year later, on my second trip to that magnificent country, my first stop was to purchase a quarter-kilo bag of biltong so that I could treat myself to a bite or three throughout the day. (Every time I fly in to LA or San Francisco, my first stop is at In-N-Out Burger; this, I justified to myself, was no different. Maybe it was even healthier!)

So when I first heard about New York Biltong, I was skeptical: Would I finally have the chance to scratch my biltong itch without having to fly move than 15 hours? My cautious optimism inevitably turned to depression when I convinced myself that it would never live up to what I’d had in Stellenbosch, in Franschhoek, in Cape Town.

But then the package arrived, the almost opalescent strips glistening in their vacuum packs. I opened the first one carefully, gingerly; my kids told me I looked like Charlie Bucket cautiously peeling back the wrapper of the Willy Wonka chocolate bar that would ultimately contain his prized golden ticket.

When I took my first bite, I nearly broke into song — which would have uncomfortably completed my transformation into the movie’s young hero.

It was the real deal. Which makes sense, seeing as this West Village-based gourmet grocery has as its beating heart the cured meat products of South Africa. According to their web site, they “work only with licensed suppliers, many of whom have spent generations perfecting their family recipes, who demonstrate our values for high standards and integrity. Our passion,” they add, “is to serve you authentic, quality foods that transport you to the flavors of South Africa.”

The grass-fed lean biltong, also referred to as “dry” biltong, boasts a subtle sweetness to it as a counterpoint to its phenomenally rich flavors, in the way that deeply savory foods often do. My older daughter proclaimed that she felt like belting out “Hallelujah” when she took her first bite, and my younger one said, simply, “My mouth is watering just smelling it.” I loved its overt beefiness, and the tender texture alongside the pleasant chew.

For the “wet” biltong, each slice has a lovely fat cap on the end, as well as beautiful marbling throughout. It’s almost chocolate-y, with more prominent roles played by sweet spice notes, and a gentle tingle at the back of the throat after each swallow. Be warned, however: Each thin slice is fabulously rich, so don’t dive into it all at the same time…though you’ll probably have to fight the urge.

The original grass-fed droëwors, a cured, air-dried sausage about the width of a finger, sings with the suggestion of spices that seem to be in the vein of coriander and cumin. The relatively rough grind of meat on the inside finds the perfect balance between rustic and refined, and the dried casing provides excellent snap. The spicy version, on the other hand, packs a subtle punch suggesting cayenne and paprika, which cut through the beef’s inherent richness.

It took our family’s concerted restraint to not demolish all of it in one afternoon.

So while I may not be able to fly to South Africa myself right now, I do have access to excellent biltong, finally. And navigating their web site to ensure timely shipping is a breeze. It’s absolutely delicious enough to help me ride out these interminably long months until I can wing my way back there again.