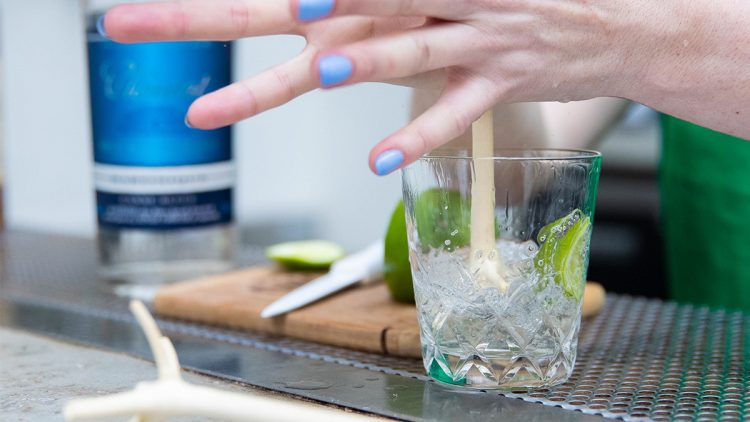 Some cocktails are intrinsically linked with their place of origin, like enjoying an icy, spicy Dark ‘n Stormy on a pink sand beach on Bermuda, the island that’s home to Gosling’s Rum and ginger beer — both integral ingredients in the trademarked cocktail. Likewise, there is something very special about sipping a boozy Sazerac at its namesake bar in The Roosevelt Hotel in New Orleans, the city where the world’s first cocktail — a spirited blend of rye, sugar and Peychaud’s Bitters in an absinthe-rinsed glass, was first stirred.

In that same category is a little drink — and we mean that literally as its name loosely translates from the French “petit punch” — that truly encapsulates the French Caribbean: Ti’Punch. While similar to the rum-based Daiquiri or the cachaça-based Caipirinha, the Ti’Punch is always made with rhum agricole, a spirit distilled with fermented sugar cane juice rather than molasses, which lends it a grassy, vegetal note.

The recipe couldn’t be more simple: Add a splash of cane syrup, a squeeze of lime, to taste and rhum agricole to a rocks glass, stir with a swizzle stick rubbed between your palms, and enjoy. No ice is used to chill or dilute the drink since ice wasn’t available at the time of its creation. Think of it as the original room-temperature cocktail, popular centuries before the recent trend during the current drinks renaissance.

“Ti’Punch is not only a representation of the French Caribbean, it’s the representation,” says Kiowa Bryan, national brand manager for Spiribam, whose collection of spirits includes Rhum Clément and Rhum J.M. from Martinique, Rhum Damoiseau of Guadeloupe and Chairman’s Reserve Rum from St. Lucia. “In recent years, a few cocktail bars have opened in the capital of Martinique [Fort-de-France] but for the most part, it’s all Ti’Punch and maybe some French wine sprinkled in.”

It’s actually considered the national drink of Martinique, a Windward Island in the Lesser Antilles, but Ti’Punch is also popular in Guadeloupe, Haiti and French Guiana. Depending on the time of day during which it’s imbibed and how it’s consumed, the libation actually takes on different monikers. An AM eye-opener is referred to as “décollage,” the French word for “take off”; a version light on the sugar is Ti’Sec, “sec” being the French word for “dry,” and a Ti’Rude contains little to no sugar or lime at all. And if you throw back a few during happy hour they are called Ti’Pape in honor of the “hour of the pope.”

As with many alcoholic beverages where memory can be, ahem, a bit cloudy, the exact origins of the Ti’Punch are unclear, though it was probably first mixed in the late eighteenth century.  At that time, Martinique was making molasses-based rum, though smaller farmers who didn’t have the machinery needed to produce sugar would simply distill the pressed cane. The first mention of the beverage in English was in 1887 in Lafcadio Hearn’s book Two Years in the French West Indies.

For her part, Bryan first discovered Ti’Punch in 2010 when she was a bartender at a restaurant on Los Angeles’ Sunset Strip, and it’s what stirred her into her foray in the booze business. “My boss, who was super knowledgeable on all things cocktails, made me one as my post-shift drink and I fell in love,” she recalls. “I went home and researched Ti’Punch and Rhum Agricole (to which there was literally nothing in English online) and Martinique and booked an expensive, four layover trip to see it myself.”

Since then, the drink has become more mainstream in the States, due in part to the availability of rhum agricole brands like Rhum Clément and Rhum J.M. She prefers the florality of Clément Canne Bleue, but depending on her mood may change it up and use a lightly aged, spicy expression like Rhum J.M. Gold.

Keep in mind that you might be chastised in Martinique for ordering your Ti’Punch with ice either in the glass or on the side (Bryan was playfully called a child when she did), but the iceless version just seems to work there in a when-in-Rome kind of way. “But when I’m home in America, the land of ice-in-everything, I might add an ice cube to dilute it a bit,” she admits, even though it does alter the flavor a bit. Her pro tip is to pop just a cube or two into the glass and stir about twenty times before removing them before they melt.

The best pairings for a Ti’Punch are the sunshine, surf and warm tropical breezes found on Grande Anse des Salines, located on a moon-shaped bay dotted with dozens of palm trees that’s considered to be Martinique’s best beach. But accras (traditional local cod fritters) ceviche, charcuterie and other salty bites go swimmingly as well.

Ti’Punch
Sugar cane syrup, made from freshly-pressed sugar cane juice, is not the same thing as simple syrup, which is made by reducing white refined sugar with water. Commercially-made versions are available from Rhum J.M., Monin and other companies. Remember the traditional recipe for Ti’Punch eschews ice; if you must include it use just a cube or two, added to the glass, stirred and then removed.

In a rocks glass, add the sugar cane syrup and lime juice. Add the rhum agricole and mix using a swizzle stick or bar spoon. Adjust lime or sugar as desired.