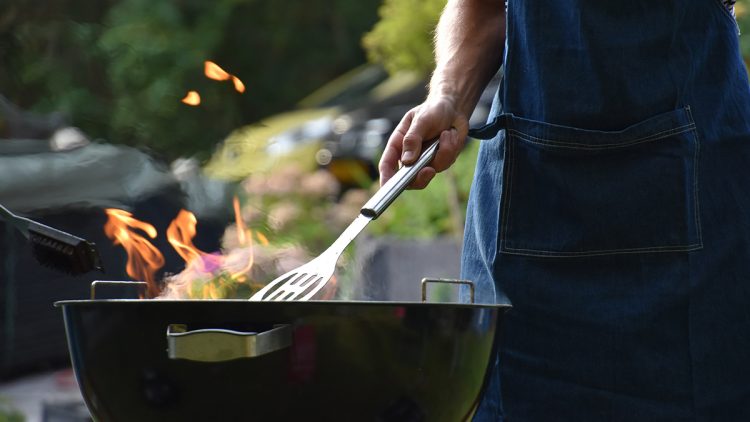 As temperatures climb in the coming months, we’ll all be looking for quick and easy meals that we can whip up without turning our kitchen into an inferno. For many of us, that means we’ll be holding off on some of our best loved baked goods. But if the thought of spending the hot summer months without your favorite chocolate chip cookies or layer cake leaves you feeling, well, heated, we come bearing good news: Yes, you can bake on your grill.

Yes, you can actually create breads, cookies, pies, and even pizzas on your grill. Sound far fetched? It’s actually more common — and a lot easier — than you’d think. The best part? It doesn’t matter what kind of grill you have in your backyard. We sought some pro tips from Traeger Grill Master Mandy Tanner and Big Green Egg’s Bob Atkinson, and here’s what they had to say.

Can you bake on any type of grill?

In short, the answer is yes. However, the experts agree that baking on a gas grill can be challenging since they tend to lose a lot of heat through their dome, making it easy to burn the bottom of whatever you’re baking without fully cooking the rest of it. If you have a gas grill, your best bet is to use a buffer between the grate and the baking pan or, as Tanner notes, something to insulate and trap the heat so that it doesn’t escape out the top. Because if heat does escape, your dish could be seriously compromised.

Explains Tanner, “If you open a grill and all the heat goes out and it can’t recover temperature quickly and accurately you won’t have the spring in your dough-based recipes. They will end up dense and flat because you need the blast of heat for the liquids or gas in the recipe to expand and evaporate leaving behind flaky layers or nice gluten structure.”

In other words, that heat is what helps things like breads and cakes rise. So if you cook on a gas grill and are tempted to peek before cooking time is up (and, let’s face it, that’s probably most of us), you run the risk of completely ruining your dish. However, Atkinson and Tanner both agree that there’s little, if any, need to peek when you’re baking on a grill because the cook times don’t differ all that much from your oven.

Baking on a pellet grill

After moving to Texas, Tanner was inspired to learn how to smoke a brisket, but also wanted something suitable for baking. After experimenting with a variety of grills and fuels, she settled on a Traeger Pro 780, a pellet-style grill, because of its versatility.

“The fact that I could grill, smoke, braise, and bake on it was what sold me on a Traeger. In the heat of summer, the thought of turning on my oven and heating up my house to bake was pretty awful. Cooking outside was the best solution,” she says.

Rather than heat up with natural gas, propane, or charcoal, pellet grills use natural hardwood pellets as their heat source. Pellets are stored in a hopper beside the grill, and then moved to the fire pot by an auger, where they’re ignited to feed the flames. A fan circulates heat and smoke for even, consistent cooking, and a drip tray keeps flames off your food and prevents flare-ups. The pellets, which you can find in a variety of woods, like sweet cherry and apple woods to bold hickory and oak, to unique blends from Jack Daniels and Pit Boss, all add extra flavor to your food.

Baking on a kamado grill

Another grill known for its versatility is the kamado grill. The Big Green Egg, which is a kamado grill that is actually shaped like a giant green egg, has an air-tight ceramic cooking chamber which effectively traps heat and keeps moisture in. Why is that important? According to Atkinson, when it comes to grilling, the less hot dry air you have, the better. This grill also has a patented air flow system which consists of a low draft door that allows fresh air in, and a top vent which allows heated air to exit. It runs on efficient, pure lump charcoal made from all-natural carbonized wood.

Atkinson, who is a Georgia native, discussed how this grill, which takes just minutes to heat up, is his choice when it comes to making the perfect pizza and southern staple, biscuits. He explained that the ceramic construct along with the adjustable air flow system and temperature gauge helps maintain the perfect temperature which, again, is a key element to success when it comes to baking. And, like Tanner, Atkinson recommends resisting the temptation to check on his goodies when baking on a grill, especially on a kamado grill since it does a good job at maintaining consistent temperatures.

We asked both Tanner and Atkinson for their recommendations on special cookware or bakeware and, as it turns out, it doesn’t differ much from what you’d use in your oven. They both agree that Dutch ovens and cast iron pans are ideal for heat retention and are a great option for a gas or charcoal grill. But when it comes to a pellet or kamado grill, any oven-safe dish will do the trick.

Atkinson notes that The Big Green Egg’s line of EGGcessories, including their pizza and baking stones and cast iron plancha skillets, are staples for him. Tanner  uses “…a variety of sheet pans, glass and ceramic baking dishes, and aluminum and stainless bakeware, as well as a high-heat safe bread cloche for her sourdough, and a pizza stone for those mouth watering hand pies you see on her Instagram page, Daydreamworkshop. (You’ll definitely want to head over there for some grilling inspiration and recipes.)

Ready to get baking but not sure where to start? According to Tanner, “Focaccia is a great beginner bread and it bakes beautifully in cast iron on the grill.” Or, if you’re looking for something even easier, Atkinson says that a store bought can of ready-to-make biscuits will do just fine.