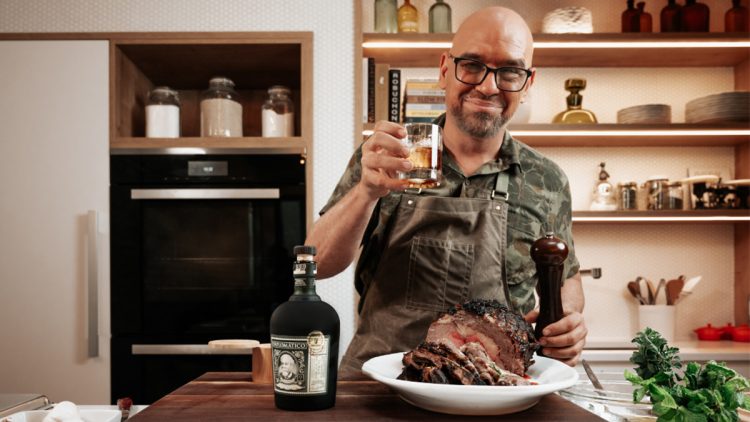 Cookbook author, Iron Chef, talk show host and accomplished restauranteur are all labels that fit Chef Michael Symon. Add this to the list: His new partnership with Diplomático Rum. Dubbed “The Heart of Rum,” the campaign showcases his love of cooking and passion for high-quality ingredients in the kitchen — including the boozy ingredient itself.

We spoke to the Iron Chef exclusively about how to add spirits to your recipes without fear, his food trend predictions for the next year, and the tools every home cook needs in the kitchen.

The Gourmet Insider: I can’t wait to find out more about this partnership because rum and cooking? Win! Can you talk to us a bit how this came about?

Michael Symon: It was pretty natural one, because it’s something we’ve always used in the restaurants and it’s always been on our liquor shelves at home. In addition to enjoying it and cocktails, it’s something that I cook with.

So, when Diplomático approached me, I was very excited because the way that they think about their rum is the way that I think about food. They use the best ingredients; they keep it very straightforward; and they produce a beautiful product. And then when we started working on different cocktails and developing recipes for them, it was something I really had a ton of fun with.

TGI: I really want to hone in on that cooking aspect. How do you cook and bake with rum and what are some tips and tricks for home cooks working with booze?

MS: I would tell them to use their palate and taste as you go, just like even if they were making a basic recipe. You want to just kind of taste as you go so you can see if you want more rum, or less rum.

I also I think a great way to start using is in different glazes. So, even if you were doing something as simple as grilling chicken or grilling pork chops, you can reduce the rum down into a glaze with a little bit of citrus. The rum is used in place of the sugar, because rum is a natural sweetener. It’s also going to give you all these other flavors that just straight sugar would never give you.

TGI: What is a surprise meal that you would make with rum that a novice cook wouldn’t think to make?

MS: Well, I think one recipe that I would recommend for something simple and delicious that people would make at home — basically, make a mojito but use it as a marinade for chicken instead. So, take a whole roasted chicken and marinated in a mojito with just a touch of olive oil in there too. Then put that on the grill. You will get all these great flavors from the natural sugar and the lime and the mint — it just really makes the chicken pop.

TGI: That sounds awesome and is now on my list of things to make. Switching gears here a bit, what is your favorite kitchen tool to use and why?

MS: For me, it’s the simplest tool — it’s a plastic bench scraper. You could get them online for, like, $2 and it I can literally cannot start cooking until I have one sitting next to me. It keeps your cutting board clean. It allows you to move chopped ingredients from your board to your pan. For me it’s like an extra hand almost or an extension of my hand.

TGI: What are some of your favorite ingredients to cook with?

MS: I think eggs are one of the most underrated ingredients. You can use them in so many things. You could have them for breakfast but in a million ways. And then in most baked goods, they’re a huge necessity. They’re in in thickening sauces, and soups and things of that nature. They’re integral. I would have a lot of trouble living without eggs.

Also, I think one of the things that really elevates a lot of food is fresh herbs. They really brighten a meal up and makes it unique. I would say eggs, lemon, fresh herbs and extra virgin olive oil. Those are my source.

TGI: Prior to the pandemic, there were a lot of really interesting food trends out there — the healthy food movement; the slow food movement; farm-to-table was still growing. Then COVID happened and everybody returned home and had to get back into their own kitchen. So now that we’re kind of coming out of that, what food trends do you think will stay with us?

MS: I think the one thing that will stay and continue to grow is the movement towards real food. Great ingredients handled the right way with a lot of respect gives you fantastic product. To be able to purchase something in its raw state and you know where it came from or something that even has been made, but you can trace it back to where it came from and you know that it was made the right way.

People get confused sometimes with calories and health food and what calories are and what’s actually good for you. They’re two completely different things. As I suffer from some autoimmune stuff, it’s like, you are what you eat. So, try do your best to eat the right stuff.

TGI: I have one more question for you today and I’m excited about this one. When building a cookware collection, what is a must have for any new or intermediate chef in the collection and why?

MS: I would say like the if I could only have two pans in my entire kitchen, I would buy a cast enameled Dutch oven — get whatever size of it fits your family or your needs. There are a million different sizes, but you could do so much and it’s so universal. And then a skillet. I really like the carbon steel skillets because not only do they last forever, but once you season it correctly it becomes non-stick also so you could do so much in it. So, I would say a carbon steel or stainless steel skillet, and then a cast enamel pan.

TGI: I cook everything in my stainless steel skillet, so I guess I’m on the right track. I’m coming for you. No, I’m just kidding.

MS: HA! Just kidding, be careful, you may lose all your hair. Look at it. Look at what happened to me. My father’s favorite saying is, “Father time is undefeated.” So, yea.