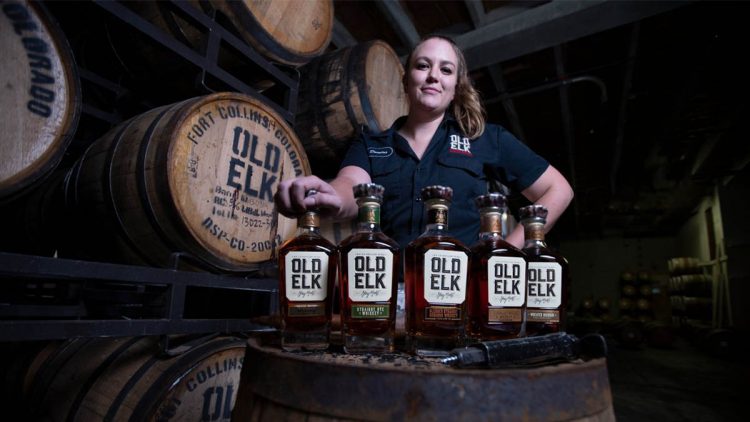 Kate Douglas, the head distiller at Fort Collins, CO-based Old Elk, fondly remembers her grandmother sipping gin + tonics, a memory that has now become front-and-center in her own life.

“The first time I ever tried gin, I was with her. You know, she always loved whiskey sours. And that’s really come full circle with me, because I love a good whiskey sour,” she says with a laugh.

Douglas, who has been with Old Elk with 2015, never thought she would have ended up in the world of whiskey. A chemistry major at Colorado State University, she wound up realizing that she wanted to head in a bit of a different direction — one that encompassed her love for cooking, baking and flavors.

“They opened up the Fermentation Science and Technology program. And it was food biochemistry, microbiology, and all of these really fascinating classes that really did take my science background and combine it with food,” she says, noting that she was able to make cheese, sausage, sourdough bread, pickles, kombucha, yogurt, and, of course, beer.

“I really thought I was going to go beer,” she says. But an internship at Old Elk changed the trajectory of her career.

“The distilling process was just taking my education one step further. And I really fell in love with distilling and was fascinated with the barrel aging process, that maturation side of things,” she says.

Her passion for distilling is something that shines through, as she speaks about the process with a smile that can’t be wiped away by even the sternest of moments. The blending and the tasting, she says, doesn’t feel like work. The encouragement and trust of her boss, master distiller Greg Metze, has been liberating.

“He is really open and encouraging, to ideas that I bring. He listens when I bring up maybe transforming things a little bit more. He’s great at giving credit where credit is due and wanting to pass on all of his knowledge,” she says.

All of her work on Old Elk and Nooku Bourbon Cream has lead her gaining trust and respect as a true badass distiller. And now, Douglas has another memory of gin to add to her memory bank — the development of her very own for Old Elk. Dry Town Gin was a labor of love, in which she tested combinations of more 75 different botanicals before selecting the best blend for the final product.

Douglas explains that she really had to throw herself into the development of gin, as she didn’t want it to echo what is already out there on the market, while not straying from Old Elk’s focus on whiskey.

“We really narrowed it down. We wanted it to be able to stand up in a cocktail and be a true gin, but not with the overpowering flavor of juniper, Douglas says, explaining the team narrowed it down to 10 botanicals, including juniper, orange, orris root, lemongrass, French verveine, ginger, black pepper, lime peel, angelica root and Colorado grown sage.

Trial and error with the distilling process — vapor, liquid, separate and combined — commenced until Douglas was finally happy with the results. Results that paid off sooner rather than later.

“It was the first the first product that we put into an award competition,” she explains. “I remember being in my apartment and checking and seeing the the results that come in — Dry Town won double gold. And it was just this really great, amazing feeling,” she says.

While her job may be done on the distilling floor, Douglas says that her favorite part of the job is sipping alongside spirit lovers, especially those who are trying Dry Town for the first time.

“I love getting to see people’s eyes light up when they try our stuff,” she says. “I like getting to challenge people, when they say like, ‘Oh, I don’t like gin,’ as I encourage them to just take a small sip at least, before passing judgement. And seeing their perception of a spirit change is just so cool,” she says.