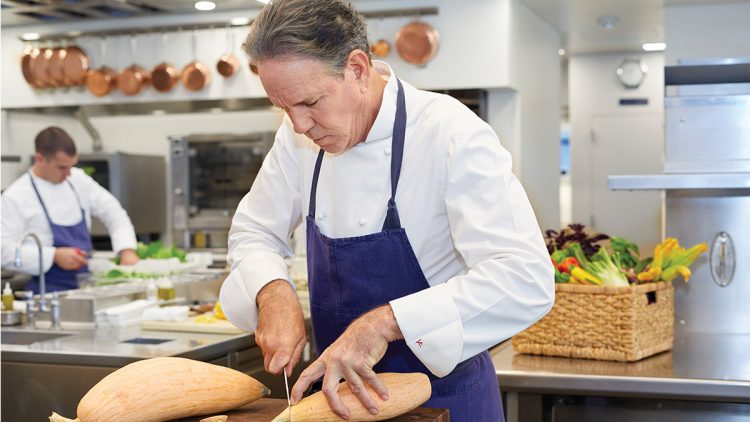 Chef and proprietor of The French Laundry, Per Se, Bouchon, Bar Bouchon, Bouchon Bakery, and Ad Hoc, Keller is the first and only American-born chef to hold multiple three-star ratings from the prestigious Michelin Guide. Decorated by the James Beard Foundation, Culinary Institute of America and The French Legion of Honor, as well as a New York Times best-selling author, Keller has made an indelible mark on the gastronomic culture around the world.

Keller took some time to speak to Emily Cappiello, chief content officer of The Gourmet Insider, about food trends, what’s on the horizon for the culinary industry and how he would choose to properly outfit any kitchen.

TGI: Can you discuss the evolution of food and dining you’ve seen in your career?
TK: I started cooking in 1974 professionally and when you think back to that time, the culinary profession and access for home cook were not where it is today. Around the country, unique suppliers, farmers, fishermen and foragers have really made their bounty available to the consumer. Chefs have always been driving that, but it has really changed the face of cooking on the consumer end. Consumers can go to the grocery store today and see an abundance of different types of ingredients and different types of products that have become available because of the evolution of dining.

America, back in the 1970s, great restaurants were exclusive to [major cities], but for the most part, America wasn’t known to have much culture around cuisine. Now in the United States, we are considered to have great food and cuisine throughout our country, and I’m really proud to have played my part in that changing landscape during the last 40 years.

Chefs are often driven by the thought that we continuously have to find something new and something different, but that shouldn’t be the case. Good is good. We don’t have to have drama in our food and we don’t always have to have something new. I always look for really good restaurants that I can continue to go back to, that are consistent, and where the quality of the ingredients and service is there. I don’t always want something exciting that jumps out at me on my plate. I believe that we need to be focusing on the people that bring us our food – our farmers, fisherman, foragers and gardeners – and how we can support them.

There is a new generation of chefs right now that are producing really wonderful things and I hope they will continue to build relationships with their suppliers.

TGI: Can you discuss the slow food and farm-to-table movements in culinary? What is your view on them?
TK: Honestly, farm-to-table has been going on forever. It’s not something new. When you walk into a supermarket, that fresh food comes from a farm and goes to your table. So, that’s something that really scares me. When the trend of using the words ‘farm-to-table’ is over, what’s going to be next? And that’s where we get into this conflict with how we are expressing ourselves and how the media is expressing what we’re doing as an industry. But, that’s kind of the trend now. Everybody wants farm-to-table, but really, everything is farm-to-table

TGI: What about social media? Do you see this impacting how chefs operate now, especially with the growth of photo-driven social sharing?
TK: Social media plays a role in all facets of society now, including the culinary profession. There are so many aspects of social media; I see it changing food the same way as it was when Julia Child went on television. Similar to TV, social media is another medium by which to communicate, share, and appreciate varying ingredients, techniques, and plating of food. Social media has allowed us to hold the cuisines of the world in the palm of our hand. It has brought unique cultures and ethnic cuisines to the forefront like never before.

History has played such an important role in what we are today, we are too focused on thinking we are the only ones in this moment, but we stand on the shoulders of those who came before us.

It’s my feeling chefs shouldn’t be solely focused on social media and what food will make a pretty picture. Rather, chefs should focus on making delicious food. And while we do share images from our restaurants, our primary responsibility is to each guest who comes into our restaurant. It’s our job to nourish them and make memories for them.

TGI: What do today’s chefs have that may be more of a struggle for them?
TK: I’m glad that when I started, I didn’t have to worry about the media and the public on the quest for something new. Today, it’s changed somewhat. We have celebrity chefs and television shows and competitions on television that it gets somewhat distracting. It’s all good, don’t get me wrong, but it’s not something that was going on when I was growing up in this profession.

TGI: What was the first thing you bought to outfit your kitchen?
TK:When I came home from France, the first piece of cookware I bought was a Wagner 10-inch cast iron skillet, which I still have today. I did everything in that skillet while I worked up to purchasing more cookware that augmented that pan.

TGI: How should a home cook outfit their kitchen, according to you?
TK: The equation to good cooking is ingredients and execution, which has to do with building your skills. Having the best possible tools that you can get, and the best possible equipment is a very important thing. You have to have tools that are durable, whether it’s a great sauté pan, a great strainer, or good knives. If you have a great knife, then you should have a great cutting board – they pair well together. Invest in a really good cutting board; it will make a difference. There are many options; I like to recommend a board that has both heft and size. All of these things are really important. If you’re going to try to buy something, try to buy the very best and then add to it over time. Make sure you’re thoughtful about outfitting your kitchen.

TGI: What is your favorite ingredient to cook with?
TK: My favorite ingredient would have to be an egg. I have eggs almost every morning for breakfast. They’re a really great source of protein, they’re filling, they get me off to a great start. But they are just so satisfying and you can have them in so many different ways – think about it. An egg is a beautiful ingredient because you can eat it at any meal during the day. But, you have to remember that eggs are the only ingredient used in both savory and in sweet. There are so many preparations – ice creams are made from eggs, custards are made from eggs, cookies are made from eggs. If you think about the versatility of an egg, it’s just extraordinary. And what’s more beautiful than that egg shape? An egg is just a beautiful thing to look at.