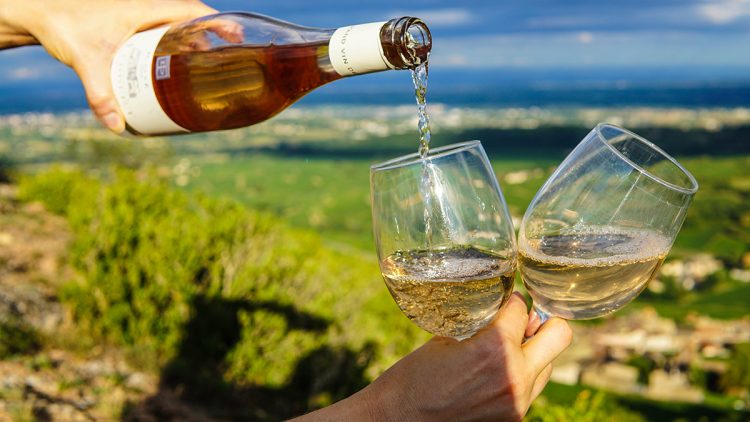 Though you may associate tropical spots with rum-based frozen tipples, some of the world’s best wines are produced in exotic locales. Even if a beach vacation isn’t happening for the foreseeable, grab a glass and be transported with these cool wines from four breathtaking islands:

Assyrtiko
The Greek island of Santorini is most recognizable for its stark white architecture and cobalt blue dome-topped roofs. But snag a table at a waterfront taverna adjacent to a black sand beach and your server will most likely recommend a chilled bottle of the local white, which goes swimmingly with grilled branzino, grilled octopus or a salad dotted with kalamata olives and feta cheese.

Think of Assyrtiko as a white wine with all the dials turned up, that rare combination of full body and high acidity–which do double duty, keeping it balanced and makes it age-worthy. It touts minerality from the volcanic ash soils in which the grapes are grown–Santorini underwent a series of eruptions including one around 1600 B.C. that devastated the island–and a brininess from Aegean breezes. (Vines are trained in a circular basket style shape to protect them from strong winds.) One sip and you’ll see why this is a wine like no other in the world.

Try: Tselepos Assyrtiko ($30), “so expressive it literally takes me back to Santorini every time I smell or taste it,” says Ronald Buyukliev, lead sommelier at the Las Vegas location of Estiatorio Milos. “There are amazing notes of fresh citrus, crushed river stone and a distinct Aegean ‘saltiness’ or salinity that brings back vivid memories for me.”

Etna Rosso
The largest island in the Mediterranean is home to the highest active volcano in all of Europe, which heavily influences local wines. At 10,912 feet, Mt. Etna towers over the landscape of Sicily, one of Italy’s five autonomous regions. It’s in an almost constant state of activity, making the soils fertile, and you can spot vineyards on mountain slopes as well as across the Plain of Catania; after Veneto and Emilia-Romagna, Sicily is the third largest wine producing region in Italy.

The past five years or so have seen the Etna DOC become a darling among sommeliers seeking trendy regions and indigenous varietals. For sure there is a lot of white wine made here that lends comparisons to assyrtiko for its crispness, salinity and mineral notes. But the red wines are just as striking, maybe even more so.

Try: Erse Rosso Etna DOC ($24.99), a blend of 90% nerello mascalese, 8% nerello cappuccio and 2% minelle and carricante. “Austere with soft tannins, round and spicy, this [wine] tells an old story about Etna winemaking where for hundreds of years the red grapes and white grapes have been mixed, a marriage between indigenous varietals,” says a rep for Vineyard Brands which imports the wine.

Madeira
The Portuguese island 320 miles west of Morocco is humid and tropical with lush green cliffs, lending it comparisons to the Hawaiian island of Kauai. Madeira is a popular destination for tourists and a UNESCO World Heritage Site, but let’s focus on the history behind the interesting process used to make its namesake wine.

Production dates back to the fifteenth century, when wines were fortified with neutral brandy to help preserve them. After winemakers discovered that the heat and movement barrels underwent during transport on long sea voyages transformed their flavor, they began replicating this process, oxidizing and “cooking” the wines either through artificial methods or by placing barrels in warm warehouses. This unique step means that unlike other dry or fortified wines, Madeira will keep indefinitely once it’s opened, not just for decades but for centuries. Styles range from dry sercial, dry-ish verdelho, sweet-ish bual and luscious malvasia, but no matter what the sugar levels, all have a signature searing mouthwatering acidity that keeps you returning sip after sip.

“Most of our guests are blown away by the complexity and versatility of Madeira,” says master sommelier Erik Segelbaum of consulting firm SOMLYAY. “They are amazed to discover not just how old the wines are but also how well they show with such supreme age.”

Canary Islands Wines
Located off the coast of northwestern Africa, the Spanish-owned Canary Islands share a tropical climate, but each also has its own microclimate, which means fun variations in the whites, reds and rosés made on six of the islands. Tenerife is the most populous island and also where you’ll find Mount Teide, which at 24,600 measured from the ocean floor is the highest in the world. The terroir in general is extreme, says Vinicius Rodrigues, Spain and South America portfolio manager for David Bowler Wines. “[A] combination of extreme winds from the Atlantic, hot spells from the Sahara desert, extreme poor volcanic soils and old ungrafted vines combine to make unique wines” from local grapes like marmajuelo, negramoll, tintilla, listan prieto and vijariego blanco.

“The majority of bodegas and winemakers realize the unique potential of their terroir and place and are exploring interesting wines that have a smokiness, a saltiness and a texture unlike wines from the continent.”

As for the name of the islands, they derive from the Ltai name Canariae Insulae, meaning “Island of the Dogs” because of the large number of canines; the bird was actually named for the islands and not the other way around.

Try: Bermejos Malvasía Volcánica Seco ($23), a 100% tank-aged wine made with a crossing of marmajuelo and malvasía aromatica, a truly indigenous grape to the Canary Islands. It’s crisp, bright and full of citrus and minerality.