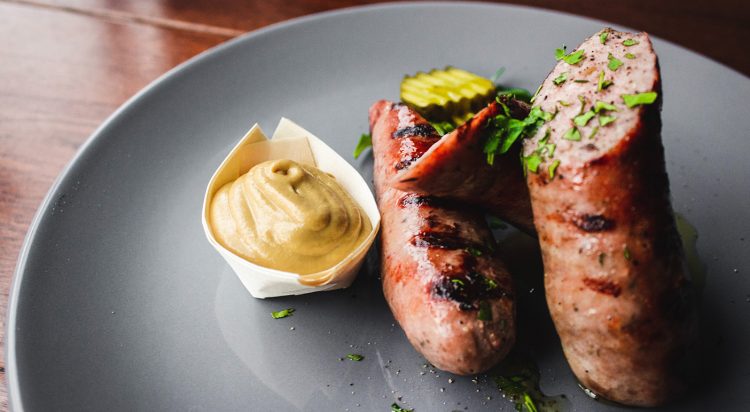 During September and October, German food definitely is top of mind as Oktoberfest celebrations take place across the world.

While almost everyone is all about pairing sauerbraten, oversized pretzels, schnitzel and other German delights with beer (especially as there are some great Oktoberfest choices available), there are also other beverages that would delight the senses as well.

When celebrating Oktoberfest, it seems like bratwurst is always on the menu. It’s a great make-and-take meal — filling, but won’t hold you back from heading to the next celebration. And, what to sip alongside them may surprise you.

“The 2017 Max Ferd Richter Riesling from the Mosel is a stellar example of a balanced Riesling, and a great idea for an easy going summer white to pair with Bratwurst sausages,” says Liz Martinez, a sommelier and wine director at Birmingham, MI-based Casa Pernoi.

She explains that this wine has great acid, with the ability to cut through the richness of the brat. But most importantly, it really allows the myriad of spices in these flavorful links to shine.

“A touch of plump and elegant stone fruit rounds out this pairing, with a flinty tar quality to stand up to the char,” she adds.

And red wine isn’t out of the question with a bratwurst either, says Martinez, choosing an opulent wine that is designed to elevate the overall dining experience.

“If you prefer a red wine, the 2016 Jean Louis Chave, from St Joseph is a beautiful Syrah from Northern Rhone. This wine is just stunning right now, with soft perfumed black and blueberries, and just a touch of smoke and licorice, it matches and lifts all of the spice components in the sausage, leaving you with the aromatic fruit profile in this wine,” Martinez explains.

According to Ryan Burk, head cider maker at Angry Orchard, beer and wine aren’t the only things you should sip on when chowing down on the German treat. Cider, too, has a place at the table.

“Pork and cider are always a perfect pairing, but Angry Orchard Unfiltered will be able to stand up really nicely with bratwurst because of the cider’s complexity and liberal use of highly tannic cider apples. The balance of sweetness and acid in Unfiltered can cut through the spice of the bratwurst, while cleaning up your palate for the next bite,” he says.

But, if beer is still on your mind, Genesee Brewing Company may have the cure for what ails you, with a new release that echoes a Helles lager but bigger, bolder, and higher ABV.

“This year, our Oktoberfest beer is a big, golden malty lager, inspired by our foreign friends. I might not be able to enjoy it under the big tent with oompah music and schnitzel just yet, but it will certainly be shared with good friends in a socially distanced backyard soiree,” says Steve Kaplan, brewmaster, Genesee Brewing Company.