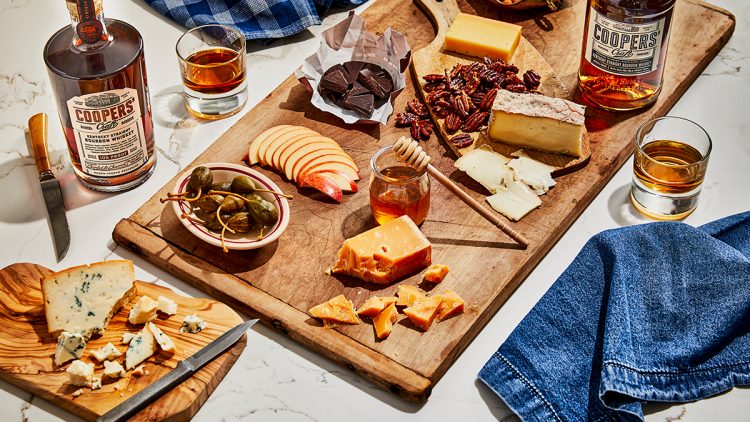 Wine and cheese go together like peanut butter and jelly. It’s a go-to for entertaining, a quick meal, or after a hard day. It’s just one of those great pairings that seemingly works no matter what you are sipping and nibbling on, no hard pairing decisions required.

But spirits, too, bring out some incredible tasting. Served alongside bourbon, whiskey and rye to even pairings that include rum, spirits bring out new flavor notes in cheeses that wine fails to highlight.

“Many people don’t immediately think of pairing cheese with bourbon,” says Will Eaves, a pasta maker and former cheesemonger at Lotsa Pasta in Louisville, KY.

He says the lemon and/or oak undertones in certain bourbons, like Coopers’ Craft, make the pairing unique and delicious. If a bourbon has those lemon and apple pie flavors, he explains that those cheese pairings will include cheddar (The Doe), taleggio and Rauchkäse, a German smoked cheese.

If the bourbon is a little bit more mature, with more notes of oak, cinnamon and vanilla, Eaves says that Comte de Gruyere is a good choice as, “Comte loves oak.” Additionally, choose a Red Dragon for more complexity.

“The dragon has texture and tang in abundance,” he says. “The [bourbon] puts a little fire on it.”

And, don’t count blue cheese out. He notes that a Smokehaus Blue is a great way to finish a spirit and cheese pairing as the creamy sweet-savory smoke, truly complex in its own right.

For an easy pairing without the guesswork, Eaves says that a Beemster XO works for just about any type of brown spirit.

“You’ll get a lot of candy and caramel right on the front, after that it mellows the spice beautifully,” he says.

Aged cheeses, like gouda, also tend to fair well with whisky, according to Greenbar Distillery.

“The flavors of the aged cheese pair well with spirits that have dimension,” says Litty Mathew, founder of the spirit. He notes that the nutty flavor in the cheese enhance whiskies with vanilla, spice and caramel tones.

If rum is the spirit of choice, says Jessica Affatato, owner of Harbor Cheese and Provisions in Northport, NY, a great pairing would be a nutty aged gouda, like a Stompertoren, for a dark rum. For a white rum, she says that a fudge blue would work, but a gorgonzola dolce would be a perfect match.

“The sweetness and higher alcohol content would cut through the fat,” she says. (Find out how to build a cheese board with advice from Jessica here!)

However, not all spirits should be paired with cheese. Tequila and Mezcal, says Michel Mustiere, culinary director of Velas Resorts in Mexico, are two of those spirits, as the contrasting flavors would be a turn-off.

“In the traditional way (and we need to respect that), white Tequila or Mezcal can be paired with citrus ingredients. Cheese, in general, are creamy and have fat, so it’s not a good idea to pair them,” he says.

But when choosing cheeses to pair with spirits, there is a good rule of thumb to follow, says Mathew. “In general, soft, unaged cheeses pair very well with lighter, sweet liqueurs; while harder, aged cheeses need something a bit more stiff to blend with. Burrata, for example, is creamy, delicate and would be completely overwhelmed by a 4-year, barrel-proof bourbon.”