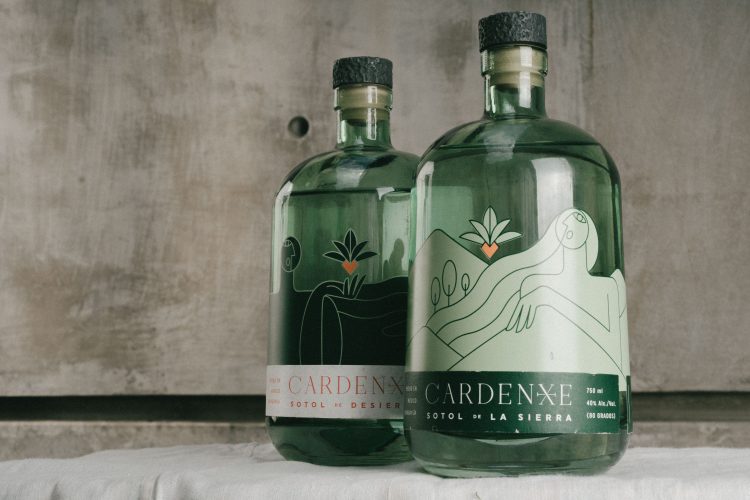 It all started with three friends, on a journey to discover the near-extinct Canto Cardenche, a musical genre endemic to Northern Mexico. There, the group discovered sotol, a distillate made from Dessert Spoon. Combining the love of spirits and the arts, the trio set out to create a brand of sotol that would easily rise to the leader of the pack, while paying homage to the deep roots of the spirit. And Cardenxe Sotol was born.

We spoke to Luigi Ambrosi, co-founder of the brand, about the story behind Cardenxe; what consumers need to know about the Mexican spirit and why it’s worth a place on your bar cart.

The Gourmet Insider: What was the thought process between blending art and music with Cardenxe Sotol? How does this speak to who you are as a brand?

Luigi Ambrosi: The mission at Cardenxe is to elevate two very unique Mexican traditions that risk disappearing – that of Sotol and of Canto Cardenche. The brand brings forth a movement inspired by the message of love and beauty that the cardencheros like to sing about. We took off on a months-long trip to understand the different methods and terroirs. We wanted to honor the music that allowed us to discover sotol, as well as incorporate the beautiful message that is the concept behind ‘El Canto Cardenche’ — the primal need to express deep emotions.

The bottles of Cardenxe bear a painted design in ‘Estridentismo’ style, one of Mexico’s foremost avant-garde movements of the 1920s and 1930s, which was characterized by a sense of nationalism and breaking away from the old to highlight Mexico’s new identity. This was a message that resonated a lot with us as we are all art-lovers at Cardenxe.

With its distinct identity and presence at art galleries, major art fairs, and music cities and venues around the world, we proudly say that Cardenxe is a sotol brand at the intersection of art and music.

TGI: Sustainability is top-of-mind in the spirits industry right now, especially with the agave plant in Mexico. What is something to know about your stance on sustainability?

LA: As per regulations of the Consejo Regulador Del Sotol, wild sotol plant harvesting is controlled and limited in each field, thereby preventing the full depletion of a single source. This creates time and space for new plants to grow. Nevertheless, the sotol supply chain learned from the sad story of the agave market (the overharvesting of wild agave paired with the lack of reforestation) and sotol producers are actively planting controlled fields where they can study the plant further and grow it sustainably.

The plant itself is also extremely resourceful as one plant can flower multiple times over the course of its lifetime. Sotol naturally gives birth to multiple plants from one qiote (flower) so once a place is harvested, there are many young sotol plants growing around it already.

Cardenxe also sources all of the bottle components and glass from Mexico, fostering the growth of national producers.

TGI: How does the terroir of sotol differ from others in Mexico? How does it create a spirit that sets itself apart from the market?

LA: Sotol is an ancient Mexican spirit that has been distilled for over three centuries in the northern Mexican regions of Chihuahua, Durango, and Coahuila, and almost faded into history. It was once a popular choice, smuggled into the U.S. during prohibition together with whiskey.

Unlike Tequila or Mezcal which are distilled from agave, sotol comes from Dasylirion, a plant native to Mexico in the Asparagaceae family. A friendlier spirit, the palate is more complex and aromatic than tequila, and has a more subtle smokiness than mezcal. The Dasylirion grows in different parts of Mexico and the country’s earth, terrain, and climate give each small batched variety its distinct flavor profiles. Generally, sotol tends to have a grassier, more vegetal, and floral flavor profile compared to that of other Mexican spirits.

Cardenxe, specifically, is a terroir-inspired spirit that is distilled from the heart of the Dasylirion plant in the north of Mexico where it holds a Denomination of Origin. Each label honors a different environment in which the plants used to distill grew. Different winds & soils, methods, cultures, and climates influence the liquid and as such, we aim to explore the unique profiles of each region.

TGI: What do consumers need to know about the brand, or what do you think would pique their interest about sipping on the spirit?

LA: First, we love to break down how to say the name of the brand: Car-den-che, the “X” lends itself to a “ch” sound.

Cardenxe was really born as a project of passion. From two adventurous individuals who share love for music, art and spirits, Cardenxe. Both myself and Nitzan, the Mexican power woman behind the other half of Cardenxe, are dedicated to infusing the category with the spirit of Cardenxe.

It took almost two years of traveling to Northern Mexico, learning the craft of distilling sotol, becoming certified ‘Mezcalier/Sotolier’, taking part in sotol-infused desert fiestas worthy of the ancient Wild West, and making many cherished friendships. It was fun, it was inspiring, it was extremely hot… and then it was extremely cold! Finally, Cardenxe was ready to launch, and with every sip, the eclectic story behind our brand really starts to transcend.

With my involvement in the independent music label Gouranga, you can be assured to see Cardenxe more and more in landmark music venues and cities, as well as music festivals and unique events around the world.