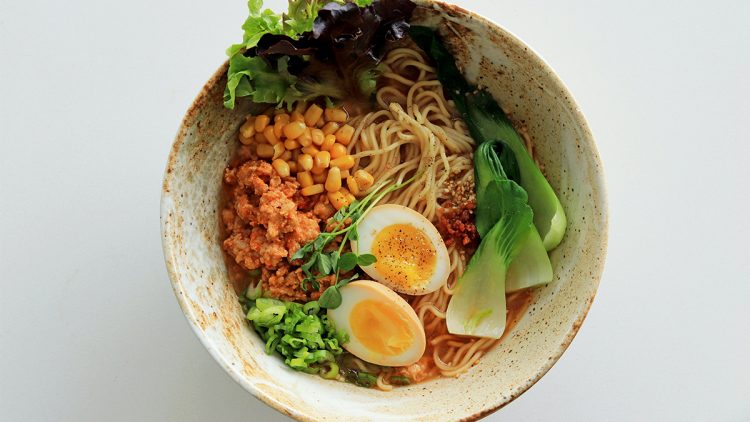 Ah, ramen noodles. Just the sight of them in the supermarket can bring you back to those college days when you wanted to spend your extra money on some Natty Ice and Two Buck Chuck instead of putting a delicious and nutritious meal in your body. We get it, we were there once too.

“Instant ramen was invented 60 years ago to help solve world food shortages, but consumer preferences have changed a lot since then,” says Kevin Lee, co-founder of Immi. Lee and co-founder Kevin Chanthasiriphan note that they invented Immi as a way of incorporating the Asian staple they grew up with eating into a healthier lifestyle.

“Immi brings back this nostalgic food that everyone remembers and loves, while re-inventing it with a completely different low-carb and high-protein nutritional profile so that people can feel great about eating ramen again,” he says. To that, he says the current version of immi uses a fresh, shelf-stable noodle that lasts up to eight to 10 months without the need of refrigeration or freezing.

But, now that we are a little older (we said a little!), we don’t have to settle for hot water and a microwave when it comes to our ramen. In fact, there are some amazing ways to amp up your ramen, no matter what type of noodles you are using.

“We actually like to recommend different toppings for each instant ramen flavor,” says Chanthasiriphan. Some of his favorite flavor combinations for Immi’s plant-based noodles include:

However, if you’re excited about a good, old fashioned Cup Noodles from Nissan or Maruchan Instant Ramen, there are plenty of ways to make those into a gourmet meal, too.

Chef Melissa King, winner of Bravo’s Top Chef All-Stars Los Angeles, says that creating a flavorful broth to cook the noodles in is the easiest way to elevate the dish. She recommends a parmesan broth, as that its versatile enough to handle both protein-heavy soups as well as those that are plant-based.

The broth, she says, is made by adding a parmesan rind to vegetable broth (or a broth of your choice) and simmering it for 30 to 45 minutes. “For a stronger flavor, simmer for an additional 30 minutes to an hour. Then season to taste with salt and white pepper,” she explains.

Additionally, she notes that adding other flavor enhancers to this broth would also work, like miso and dried shiitake. However, before making the ramen, she says to be sure to strain the broth and discard all the solids. From there, she says to go crazy with whatever garnishes you wish. Some of her favorites include:

Looking to pair up your ramen with something delicious to drink? Lee recommends beers like Asahi Super Dry, Tsingtao and Sapporo Premium. “Or if you’re feeling fancy, a Hitachino White,” he says.