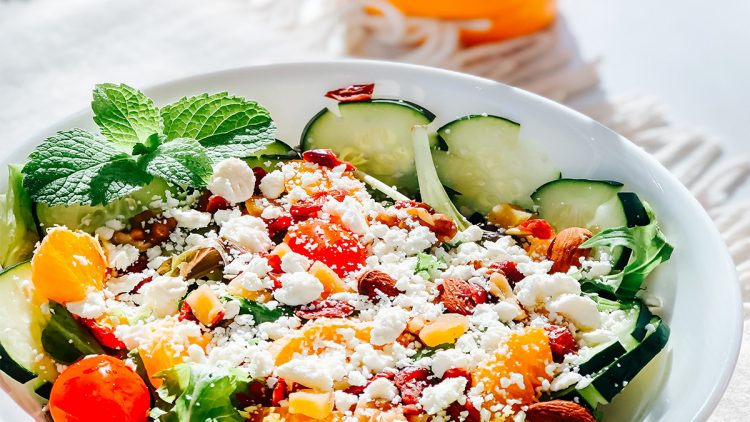 Greek cuisine is loved around the world for being simple yet flavorful. Even the country’s most iconic dishes are clean and fairly no-frills — which means whether you’re a self-proclaimed home chef or a kitchen novice, mastering a few Greek recipes is a no-fail way to expand your cooking repertoire.

Clean and simple, however, does not mean boring. “Food is a huge part of Greek culture,” says James Paloumbis, founder of iSouvlaki, a new Greek restaurant in Manhattan’s East Village. “Whatever we do, we end up eating and drinking. Food is an excuse to meet as much as gathering is an excuse to eat.”

Almost every Greek dish contains these five basic ingredients: Extra virgin olive oil, oregano, lemon, salt, and pepper. Instead of loading up on extras, Greek cuisine lets its easy preparation and fresh ingredients shine; whether it’s a crunchy salad or broiled branzino, “we like to use everything nature provides us,” says Paloumbis.

Greek eating habits also inspired the “Mediterranean Diet,” often regarded as the healthiest diet there is. They eat lots of fruits, vegetables, lean meats, eggs, and seafood (some of the most famous in the world), and steer clear of the heavy sauces and fattening ingredients that the other cultures tend to favor (we’re looking at you, America).

If you’re jonesing to try your hand at Greek cooking, these five recipes are courtesy of Paloumbis and authentic as it gets.

Kokkinisto
Kokkinisto, which translates to “reddened,” is a Greek beef stew in tomato-based sauce. It’s very traditional, healthy, and not expensive to make,” says Paloumbis. You essentially buy meat and put it in a pot — even beginners just honing their cooking chops will be able to nail this dish in no time.

Another reason Kokkinisto is such a staple on Greek family tables? You can get extremely creative with leftovers. The slow-cooked thick sauce and meat goes just amazingly over pasta with grated kefalograviera as it does stuffed inside a pita with salt and pepper for a snack.

Directions:
In a deep pot, saute olive oil, red onion, and five garlic together; add beef chunk and mix until brown. Add the rest of the ingredients into the pot and cook for two-and-a-half hours on a low fire.

Pro tip: Not sure if your sauce is done? Tip your pot to the side and look out for water — if you see any, let it keep cooking until it’s thick because that’s where the flavor is!

——————————————
Strapatsatha
Strapatsatha is essentially fancy scrambled eggs. “It’s the easiest plate to make for one person or ten people, and it’s so flavorful,” says Paloumbis.

Greek people live their lives right — they like to go out and spend time at the beach, and thus, don’t want to feel weighed down by heavy food. Though Strapatsatha is traditionally a breakfast dish, it can and should be enjoyed any time of day (for instance, in the afternoon with a Greek salad and french fries).

Directions:
Heat up the olive oil in a pan. Grate the tomatoes and sauté until there is no more water, then add and saute the onion until it loses its color (about five minutes). Next, crack the eggs into the pan and keep pushing them around as they cook to make scrambled eggs. Add the feta and mix into the pan with a pinch of salt and pepper, then serve immediately with bread.

Pro tip: Add the feta in at the end right before you serve so it doesn’t melt and disappear, losing much of its flavor. Also, don’t cut corners with canned diced tomatoes — use fresh tomatoes and grind them yourself in the pan.

Though the ingredients for a Greeks salad are quite basic, they must be in season and good quality. Pay extra attention that the tomatoes are firm: “If they’re too soft, the tomatoes and their juices will dissolve into the salad and make a disaster,” says Paloumbis.

Also, it’s a must to serve your salad with a piece of pita bread so you can dip it into the salad’s juices and keep the enjoyment going.

Directions:
Chop all vegetables and toss in a bowl with chunks of feta, olives, oregano, and a pinch of salt. Add olive oil and red wine vinegar, then stir to coat other ingredients.

Pro tip: If you’re in a rush and serving your salad immediately after making it, add a spoonful of water to your olive oil and red wine vinegar —this helps all the juices spread around your veggies faster.

——————————————
Tyrokafteri
Similar to Tzatziki, Tyrokafteri is a classic, generally mild spread that has a feta cheese and Greek yogurt base.

Once again, this dish is a frequenter on Greek tables because it goes with (and on) literally everything: Slather it on a gyro with meat and veggies, smooth it on grilled pork, slap some on a ham and cheese sandwich, the list never ends. “It’s a similar concept to Mexican guacamole,” says Paloumbis.

Directions:
In a food processor, add cheese, yogurt, olive oil, vinegar, bell pepper, and hot pepper. Process until the ingredients are evenly combined, about 30 seconds. Transfer to a bowl and serve with a drizzle of olive oil and a side of pita bread.

Pro tip: If you prefer your Tyrokafteri zippier, turn up the heat with more chili peppers. Make sure you’re not too heavy-handed out of the gate, though — it’s easier to add more spice than it is to remove.

——————————————
Chicken Kebabs
Yup, we can thank the Greeks for everyone’s favorite summertime meal: juicy meat-on-a-stick, hot off the barbecue.

It’s scary how easy these are to make and perfect—if you can nail your simple marinade (which consists of the aforementioned short list of go-to Greek ingredients, plus mustard), these chicken kebabs basically make themselves on the grill. If you don’t own one, Paloumbis assures you they taste just as scrumptious cooked in a pan, broiler, or oven.

Feel free to eat the meat right off the skewers, or make a pita sandwich (aka, “chicken souvlaki”).

Directions:
To make marinade, mix together all ingredients in a large bowl or big ziplock baggie; set aside. Next, cut chicken into nice, equal-sized chunks for even cooking. Add meat chunks to the mixture and let it marinate in the fridge for at least two-to-three hours, making sure liquids are covering the chicken.

Before you cook, soak your wooden skewers in water for 15-30 mins so they don’t catch fire. Push chicken chunks on the skewers, then cook for 10-14 minutes on the grill.

Pro tip: Marinate the chicken overnight in the fridge for extra flavor.