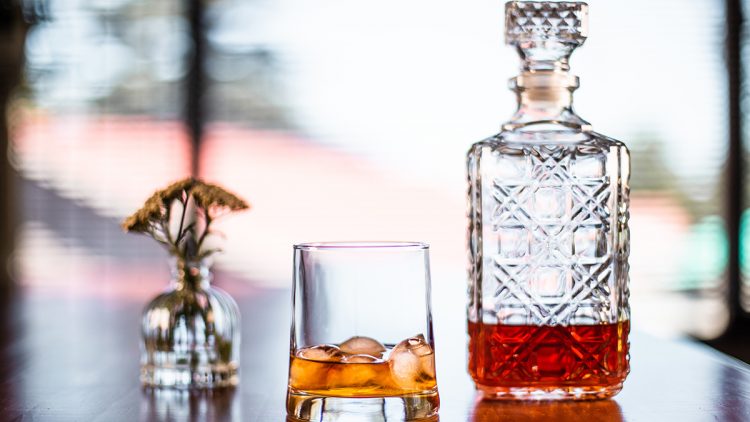 Whiskey has a long history. Originally used as a medicine, the spirit was brought to Ireland and Scotland via traveling monks where distilling techniques converted barley beer into whiskey. Mind you, this was around 1,000 years ago and like a fine wine, the spirit has only gotten better.

But perhaps just as important as the taste is the vessel in which whiskey is housed in. Maximillian Riedel, CEO of the wine glass company Riedel, shares his knowledge of the whiskey decanter, where it originated and how it continues to rise in popularity.

“Whiskey was not always sold and presented in the modern way. The trend of cool and hip whiskey bottles is new,” he said. “Before, whiskey was mainly sold in barrels to traders and retailers who then had to fill them up into different vessels in different sizes,” says Riedel, adding that elegant and wealthy households began storing whisky in crystal decanters, and the trend never really went away.

“To show its color and conditions. This style we’ve come to love stemmed from a British glassmaker in the 1730s who introduced the stopper to limit a spirit’s exposure to air,” says Riedel.

A bit of a chemistry lesson for you: When liquor is exposed to oxygen for a long period of time, it begins oxidize and lose its taste. Sure, it may look pretty on a classic table in your favorite drama or soap opera, but what exactly is the purpose of a decanter?

“In wine, decanting helps to aerate the wine, oxygenating it and allowing it to develop outside of the bottle. With spirits, decanting has more of a traditional value,” says Riedel.

Fact: A crystal decanter for spirits must be airtight versus a decanter for wine. Riedel designs wine and spirits-specific decanters to enhance flavors, with both aesthetic and functional designs.

The different shapes and configurations for spirit decanters are more so decorative and based on personal preference rather than its functionality in aerating the spirit, according to Riedel.

“Unlike wine, spirits can last in a decanter as long as it would in its original glass container (and for many years),” he says. Riedel recommends the brand’s drink specific glassware spirits decanter, which boasts a stopper that creates an air-tight vessel that is “more appealing to the eye than perhaps the original packaging.”

And while Prohibition-era television shows like Boardwalk Empire and Peaky Blinders have heavily contributed to the popularity of imbibing spirits in decorative glassware, has the media influenced a return to whiskey as an experience rather than just having a drink? According to Riedel, it’s a bit of both.

“I do believe that social media, and popular culture, shape the way consumers alter their beverage experiences. Styles and trends come and go, but classics are called classics for a reason, and many designs in the spirit world remain the same,” he says.

So, here’s to perfecting the classics and elevating tableware. Cheers.